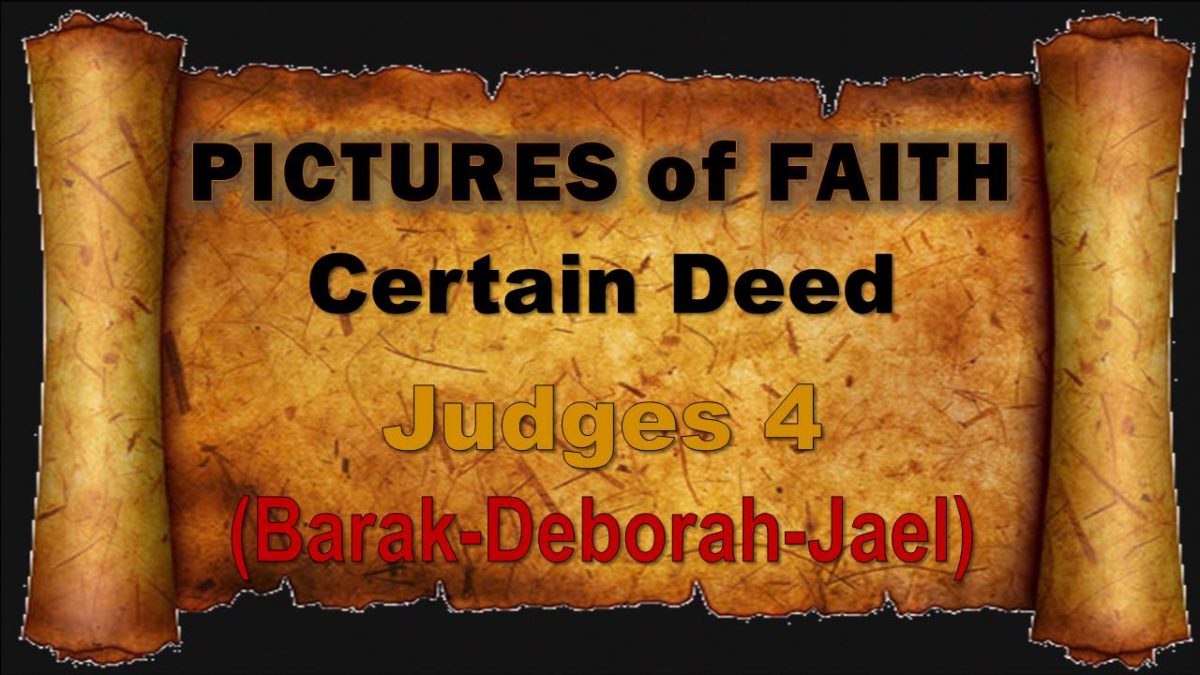 During these summer months we’ve been watching a good bit of baseball in the Northwoods. In the age groups in which most of our Woodland kids play, games are a battle between the pitcher with himself and the batter with himself, the catcher somehow figuring into the action and helping a little.

Most kids start the season knowing they’re to hit the ball. But, as pitchers struggle to find the plate, batters get used to just kinda standing there. So, in the event of an actual good pitch, lots of kids just choke. Lots of walks, lots of called strikes, lots of strikeouts. So it goes …

Today’s account from Judges 4 is about a military leader who couldn’t swing at a strike. God wins the game, and Barak (ever heard of him?) gets to play on the team, but somebody else gets the glory.

The Book of Judges begins with Israel’s failure to occupy the land. Joshua dies, and the people turn from God. God provides judges who act as both civil and military leaders, but the people return again and again to the gods of their neighbors, so that there is a downward spiral in society: And the people of Israel did what was evil in the sight of the LORD … That’s the refrain that separates the different sections of the book.

Women figure prominently in Judges, both as heroines and as victims. Men are halting and hesitant to obey God. It’s an R-rated book that glorifies God by giving us a realistic picture of what it looks like to mess around with sin and not follow God.

Have a read through Judges 4. When you do, you’ll notice that God disciplines so that Israel is oppressed by her enemies (:1-3). And the people of Israel again did what was evil in the sight of the LORD … (:1). In response, God delivers the nation to Jabin, a Canaanite king whose general is Sisera who commands iron chariots. At the end of the Bronze Age when warfare involved punching holes in soft metal, a nice hard, iron chariot would have been the final deterrent, and Sisera has 900 of them. After 20 years of oppression, the Israelites cry out to God.

Deborah judges while Barak chokes (:4-10). Now, we meet Deborah. She’s the first of the heroines in the book and she judges Israel while sitting under a tree in the hilly country of Ephraim. These are primitive times in Israel, but God has a witness, always. God, through Deborah, summons Barak: Has not the God of Israel, commanded you, Deborah tells Barak, Go, gather your men at Mount Tabor, taking 10,000 from the people of Naphtali and the people of Zebulun. And I will draw out Sisera, the general of Jabin’s army, to meet you by the river Kishon with his chariots and his troops, and I will give him into you hand? (:6b-7).

Barka hesitates. If you will go with me, I will go, but if you will not go with me, I will not go, he answers Deborah (:8). This might or might not have been fear, but clearly God isn’t enough for Barak. He’s choked, and Deborah agrees to go with him, but announces Barak’s loss of blessing: And she said, ‘I will surely go with you. Nevertheless, the road on which you are going will not lead to your glory, for the LORD will sell Sisera into the hand of a woman.’ Then Deborah arose and went with Barak to Kedesh (:9).

God glorifies Himself, and two women act (:11-24). Before giving us the outcome of the battle to follow, we’re given a picture of Heber the Kenite, who has pitched his tent in the vicinity of the battle. Then, Sisera calls out his chariots to Mount Tabor where Barak and Deborah have assembled their army. Sisera camps near the river Kishon. And, Deborah gives the command: Up! For this is the day in which the LORD has given Sisera into your hand. Does not the LORD go out before you?

God then delivers Sisera’s army into Barak’s hands. The text is sparse in description, but the song of victory that follows in the next chapter gives us a hint as to the natural means God used: The torrent Kishon swept them away, the ancient torrent, the torrent Kishon (5.21). It seems Sisera had camped near a wadi that suddenly made the chariots about as useful as 900 iron folding chairs.

Sisera escapes on foot and makes his way toward his friend Heber the Kenite. Heber isn’t home, apparently, but his wife is. Unknown to Sisera, Jael the wife is a good Israelite, and when she invites him into her tent and covers him up, he’s secure enough to fall asleep. Bedouine women, I have read, are good with hammers and tent pegs, and Sisera never wakes from his nap. Jael hails Barak who is running by, and Deborah later celebrates Jael in her song: Between her feet he [Sisera] sank, he fell, he lay still; between her feet he sank, he fell, he lay still; where he sank, there he fell—dead (5.27).

The lesson of Barak is that hesitation in obedience results in loss of blessing.

We all need to take seriously the perils of hesitating to obey God. Failure for the Christian will not result in judgment (this fell on Christ!), but loss of blessing, and the discipline of the Lord.

The writer to the Hebrews, addressing Jewish believers in a season of hesitation, writes: For the moment all discipline seems painful rather than pleasant, but later it yields the peaceful fruit of righteousness to those who have been trained by it (Heb 12.11).

This is a good word for all of us who have trusted Christ. Sometimes, we feel dry in our faith, distant from others who usually refresh us, discouraged. It might not be, but could it be that we’ve choked. Like Barak, God has asked us to put to death some fleshly pattern or practice, but God wasn’t enough for us. It’s worth thinking about.

Even so, the lessons from Judges 4 aren’t all in the negative. It’s not enough not to sin; it is enough to seek God’s glory! This is because the Christian life isn’t simply a list of rules to obey, but an opportunity to seek God’s glory in any and every situation.

Seeking God’s glory in my obedience magnifies God and blesses me.

Hitting the ball is the fruit of a good swing of the bat. And, seeing God made big in my circumstances is the fruit of obedience. This blesses me. I am alive with hope and the best of all desires when I see God change my heart and the hearts of other people.

So, how does God desire to bring glory to Himself through your obedience in your situation today? It’s worth thinking about, because God’s glory is the biggest window through which we can view reality. Don’t choke, then; swing the bat. Seek to serve the LORD in obedience today!