This week at Woodland it was “Game on” with VBS! Our hook for the week involved sports, and we naturally talked about some of the things teams and athletes do to get a competitive advantage—training, exercises, drills; that sort of thing.

Really, though, we weren’t talking about games, but life. And, like this week’s passage from Judges 7 teaches us, we learned that God doesn’t always work through our advantages but through our disadvantages.

Judges 6-8 starts with an apparent problem for Israel: the Midianites have overrun God’s people, and everybody is afraid. The actual problem is that Israel has not obeyed God (6.8-10).

The Angel of the LORD visits Gideon who, out of fear, is threshing grain underground, because he too is afraid. The LORD charges Gideon with delivering God’s people, to which Gideon responds by listing his disadvantages (6.12-16), but then asking for a sign. Two signs are given. One involves the lighting of a sacrifice in Elijah-like fashion, the other is the famous account of the fleece which is first wet then dry. Pretty arbitrary really, but clearly from God.

Does Gideon now believe that having the LORD on his side is a good enough advantage?

Chapter 7 opens with Gideon having raised a decent army—32,000. The Midianites, however, have a much bigger army and are encamped in the Jezreel Valley, probably about four miles to the north of the Israelites.

Gideon receives his “advantage” (:1-8). Here, we get the crucial verse in the account: The LORD said to Gideon, “The people with you are too many for me to give the Midianites into their hand, lest Israel boast over me, saying, “My own hand has saved me” (:2).

In other words, Israel, disadvantaged as they are, is still too strong to trust in the LORD. God thins their ranks. Those who are afraid are allowed to leave, and 10,000 remain. Then, all are given an opportunity for a drink, and those who lap up water like a dog are told to stay. Only 300 now remain, and that’s finally looking like an impossible disadvantage.

Gideon recognizes his “advantage” (:9-14). At this juncture, Gideon gets his third sign. He’s told to go down to the enemy camp and listen in to a conversation. In the dark, listening outside a tent, Gideon hears a soldier give an account of a strange dream involving a piece of barley bread (eaten by the lower classes and clearly representing Israel) tumble into the Midianite camp and destroy it. Strange indeed, but the Midianites interpret the dream as an omen and recognize Gideon’s imminent victory. Gideon responds by worshipping God and beginning, finally, to act like a general.

Gideon respons to his advantage (:15-25). Now, Gideon divides his troops, gives each man a trumpet and a torch concealed in a jar, and then leads his small company to surround the enemy camp. At the signal, everybody blows, jars are broken, torches are lifted up, and the Israelites just stand there while the Midianites run around killing one another and then running for their own country. The battle scene ends with Israel pursuing their enemies right out of their land and the heads of the two Midianite generals coming back to Gideon as a couple of souvenirs.

God’s lesson for Gideon was that Gideon’s advantage wasn’t in what he thought, but that his real advantage was in his relationship to Him.

How about us? Where do we have a perceived disadvantage in life? Could it be that some of us grew up without a father or mother, and we now have kids but feel clueless? Or, maybe some of us have adult children who are now making decisions that aren’t good, but we feel like spectators? Or, maybe, some of us are students, and we’re excluded from the group and wondering how this growing up thing is going to work when we feel alone?

This week at VBS our theme verse was 2 Peter 3.1: His divine power has granted to us all things that pertain to life an godliness, through the knowledge of him who called us to his glory and excellence.

Can you believe it? God is creating a new reality all based in the power of a man who died on a cross. The work of the (apparently) seriously disadvantaged Jesus Christ is God’s way of overturning every other perceived advantage in the universe. And, like Gideon, we sometimes have to endure our apparent disadvantages to learn that God through Jesus is enough! And when we do, we boast in the LORD and not in ourselves.

God wants to meet you in your perceived disadvantage and be enough for you, so that where you are weak He will be strong.

My greatest advantage in this life isn’t where I (often) think but it is in Christ’s work … And God loves a (dis)advantage. 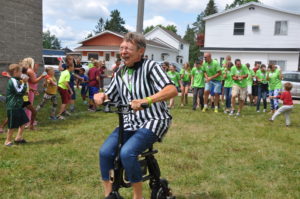 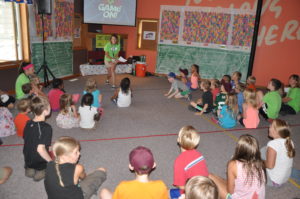 One thought on “Pictures of Faith: Certain Advantage—Judges 7”