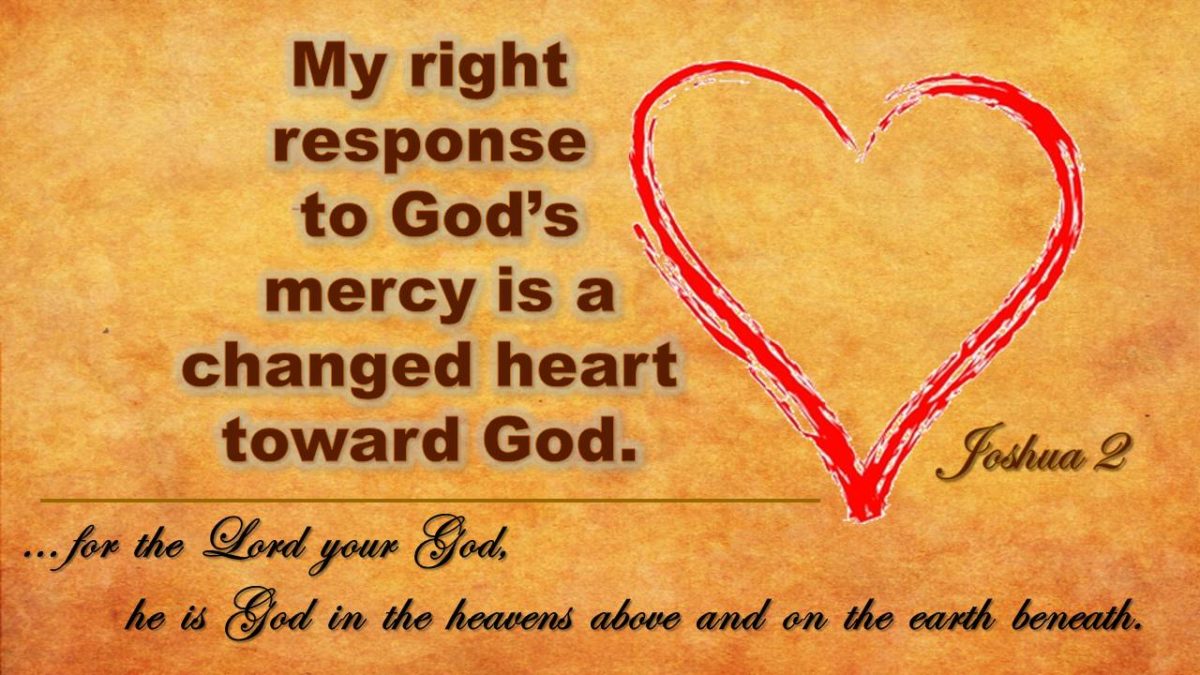 Heaven will be home to some unlikely people, and Hebrews 11 records some of them—Barak, Jephthah, Samson. But today, we’re thinking about the most unlikely figure from that list of Old Testament persons who trusted in a Redeemer who was to come.

In the backstory to Joshua 2 Israel has long since been freed from Egyptian bondage. But now, after God’s great feats under Moses and Aaron, the nation has wandered for forty years. Joshua leads Israel, and he’s urging its people to take the land God has promised: … be strong and courageous. Do not be frightened, and do not be dismayed, for the LORD God is with you wherever you do (1.9).

Then, Joshua sends spies. Will the debacle of Numbers 13-14 be repeated from forty years earlier—when only he and Caleb believed the LORD would deliver the land to them? No, this time things will be different, largely through the ministry of an Amorite prostitute named Rehab.

Rahab tells a falsehood (:1-7). After crossing the Jordan, the spies slip into Jericho and mingle in the home of Rahab. This home might have been a brothel—perhaps a loud and seedy place where a stranger could get lost, mind his business (or not!), and gather news. But, somehow, the spies’ cover is blown. Soldiers arrive, and Rahab hides them on her roof and covers for them with some barefaced lies: I didn’t know where they were from … they went out last night … I don’t know where they went (:4-5).

Some have struggled with the way the New Testament rewards Rahab for her deceit. (See Hebrews 11.31 and James 2.35). Important to remember is that God has removed the authority of the Jericho leaders. So, we’re justified  in concluding that they know longer deserve to know the truth. Rahab is changing her allegiances. Her faith “looks” like something. That’s the point James 2 makes. And living out her newborn faith will look like a heart-change toward the one, true, God of Israel.

Rahab falls on God’s mercy (:8-14). Late at night, when the bounty hunters have departed, Rahab visits the spies on the roof of her house. It’s here we see her heart, together with the evidence of God’s mercy and her right response to God’s work. She shares what’s been going on in Jericho, and in her own heart. She cites God’s work in Egypt, the destruction of the Amorite kings Og and Sihon, and gives her new estimation of the God of Israel: … the LORD your God, he is God in the heavens above and on earth beneath (:11b). Then, Rahab falls on God’s mercy: Now then, please swear to me by the LORD that, as I have dealt kindly with you, you also will deal kindly with my father’s house, and give me a sure sign (:12). “Kindly” … that’s the Hebrew word hesed, “unfailing, loyal love based on a covenant relationship”. Rahab is saying, “Show me how to be on the side of the one, true God; I want to be in relationship with Him and you!”

The evidence of God’s mercy in Rahab’s life is a changed heart toward God. That’s what faith looks like in the life of an Amorite prostitute, or anybody for that matter!

Then, Rahab enters into covenant (:15-23). The rest of the passage is about how Rahab helped the spies escape, and about the terms of the deal they make with her. She’s spared their lives; they’ll spare hers in the coming invasion, but she’s got to stay at home and reveal her whereabouts with the scarlet cord they give her. But, here I have a question and an observation. Why is the wall mentioned in verse 15? Then she let them down by a rope through the window, for her house was built into the city wall, so that she lived in the wall.

We join the original readers of this account in knowing what is going to happen to these walls. They’re all coming down, right? (See Joshua 6). And, we get to puzzle over the irony that Rahab is being told to stay at home on the wall that’s about to fall. I’m not sure how the mechanics of this worked, but we know that Rahab kept the terms of the covenant and was spared. The point here, though, is that there’s only one way out of Jericho, and it’s through God’s mercy!

The picture of Rahab and her family huddled on the wall trusting in the one, true God and flinging herself on God’s mercy because of her changed heart makes an easy intro to talking about the cross of Christ, doesn’t it?

Among many New Testament verses, Romans 14.10b-12 makes it clear where we’re all headed: For we will all stand before the judgment seat of God; for it is written, ‘As I live, says the LORD, every knee shall bow to me, and every tongue shall confess to God’. So then each of us will give an account of himself to God.

We’re not all prostitutes, but we’re all sinners. And, we’re all in need of God’s mercy. For us who live after the coming of Jesus, bowing the knee before we meet God looks like trusting God’s mercy in the work of Christ. The wall of Jericho involved God’s judgment but involved a way out through God’s mercy. God’s judgment on Jesus at the cross is all about God’s mercy, because Jesus took our sins on Himself. We show we “get” this truth by a changed heart toward God, involving trust in Jesus and His work. This looks like a changed heart toward, just like it did for Rahab.

So we say, my right response to God’s mercy is a changed heart toward God.

The account of Rahab in Joshua has a happy ending. Rahab is not only numbered among the faithful of Hebrews 11, she’s numbered among those who joined Israel (6.22-25). She’s also numbered among the physical ancestors of King David and Jesus Himself! (Matthew 1). Most importantly, she joined the family of God through God’s mercy and by faith.

How about you? Have you ever read this Old Testament account this way? Have you ever seen before how it points toward Jesus and His work? And have you recognized your need for God’s mercy, understood how Jesus took your sins on Himself at the cross and then trusted Christ?

If not, why don’t you trust Him right now? And then, you can say with all God’s people: “the LORD [MY GOD], he is God in the heavens above and on the earth beneath. And, I have received His mercy, in Christ!”