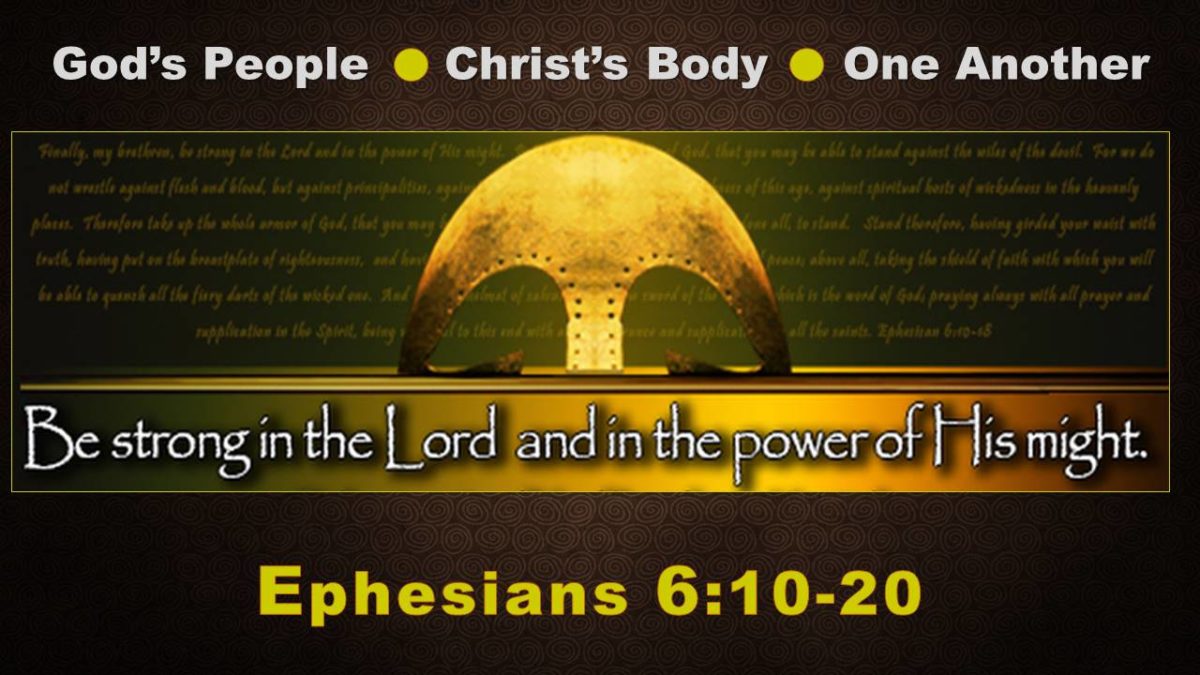 This week at Woodland we finish up a good journey. We come to the end of our study in Ephesians.

We’ve seen how God has called out a people to be His church (chapters 1-3), and we’ve seen how we’re to respond as God’s “called out” ones (chapters 4-6): by walking … in unity, holiness, love, light and wisdom.

And now, suddenly, we’re to stand. Big bump of a contrast, isn’t it? While feeling like we ought to be advancing, we’re suddenly NOT to think about moving forward. The reason is that we have an enemy. And this brings us to our next and final unpopular idea—maybe even more unpopular than the submission and obedience we’ve been considering in recent weeks.

We westerners like spirituality. Who among us would ever get criticized for really living for something we can’t see, feel or touch? The problem we have in our culture is that we like to define the boundaries of our own spiritual experience. We like to be in charge, to manage things.

And now, suddenly again, we meet God’s enemy. And, he and his legions are a lot more than we can handle! For we do not wrestle against flesh and blood, but against the rulers, against the authorities, against the cosmic powers over this present darkness, against the spiritual forces of evil in the heavenly places (:12, ESV).

And God’s enemy (with his legions) hates the church. He hates us because while we rebelled with him, he isn’t made in God’s image, and he isn’t redeemed. We who have trusted Christ are.

So what are we do? We’re to put on God’s provision (:10-13)  … be strong in the strength of his might (:10) This not only describes how we’re to contend, but where our strength lies and whose strength we’re relying on.

Superb! But even while our salvation comes from outside us, we’re not passive in this. There’s still something for us to do.  … Put on the whole armor of God, that you may be able to stand against the schemes of the devil … that you may be able to withstand in the evil day and having done all, to stand firm (:11 … 13) In other words, having been chosen in Christ and placed in the church, we’re still about to be attacked. The purpose of making use of God’s provision is to be ready for the particular attacks of the Evil One.

Before the particular attacks of the Evil One we are to take up truth, righteousness, peace and faith. These are likened to the belt, breastplate, boots and shield of the soldier. All these implements of warfare helped ancient soldiers stand TOGETHER. Then, just before combat the “helmet of salvation” and “sword of the Spirit” must be snatched up. These complete the soldiers defenses and give him an offensive weapon.

A picture of ancient warfare helps. Soldiers would stand side-by-side in an interlocking formation called a phalanx in which they would guard one another with their shields. The enemy would hurl pitch-drenched and flaming javelins into the wall of shields hoping to ignite the defenses, or at least disable the defenses so that the shields would have to be abandoned. Once members of the phalanx had been disarmed the enemy would rush in carrying short swords called  gladii. Hand-to-hand combat would result. If the soldiers could be separated from one another, the enemy would prevail.

Fascinating history lesson, isn’t it? But, we’re not talking about history, we’re talking about the church and our lives and right now. What does this warfare look like for us?

A good rule of application is that the response to any passage is organic to the passage itself. So, in Ephesians, we’ve just been told to walk … in unity, holiness, love, light and wisdom. We’re to do this as God’s church, together. What does God’s enemy want? He wants to divide us, so that disunity, lack of holiness, consuming self-love, spiritual and moral darkness and the quenching of the Spirit of God result. Salvation isn’t hanging in the balance, but fruitfulness, blessing and God’s glorification in our lives are.

Can you sense when that’s happening? That’s the “evil day” (:14). Even so, the faithful follower of Christ will prevail in the day of temptation and attack, because she has been outfitted with God’s provision.

To stand in spiritual warfare, put on God’s provision.

We’re either under attack or we’re about to be attacked. That’s life between Christ’s two comings. Even so, we have everything we need to flourish in the Christian life. And, we have one another in this remarkable creation called the church. That’s the message of Ephesians.

So, we pray  …  at all times in the Spirit, with all prayer and supplication (:18a). keep alert with all perseverance, making supplication for all the saints … (:18b)

All of this allows Paul to end his letter like he began. Peace be to the brothers, and love with faith, from God the Father and the Lord Jesus Christ. Grace be with all who love our Lord Jesus Christ with love incorruptible (:23-24).

Think a bit about what this passage looks like in your life.

When are you (and God’s other people with you) most prone to attack?

What does putting on God’s provision actually look like for you, in your thinking, attitudes and behavior?

Why is God’s enemy worthy of your respect but not your fear?