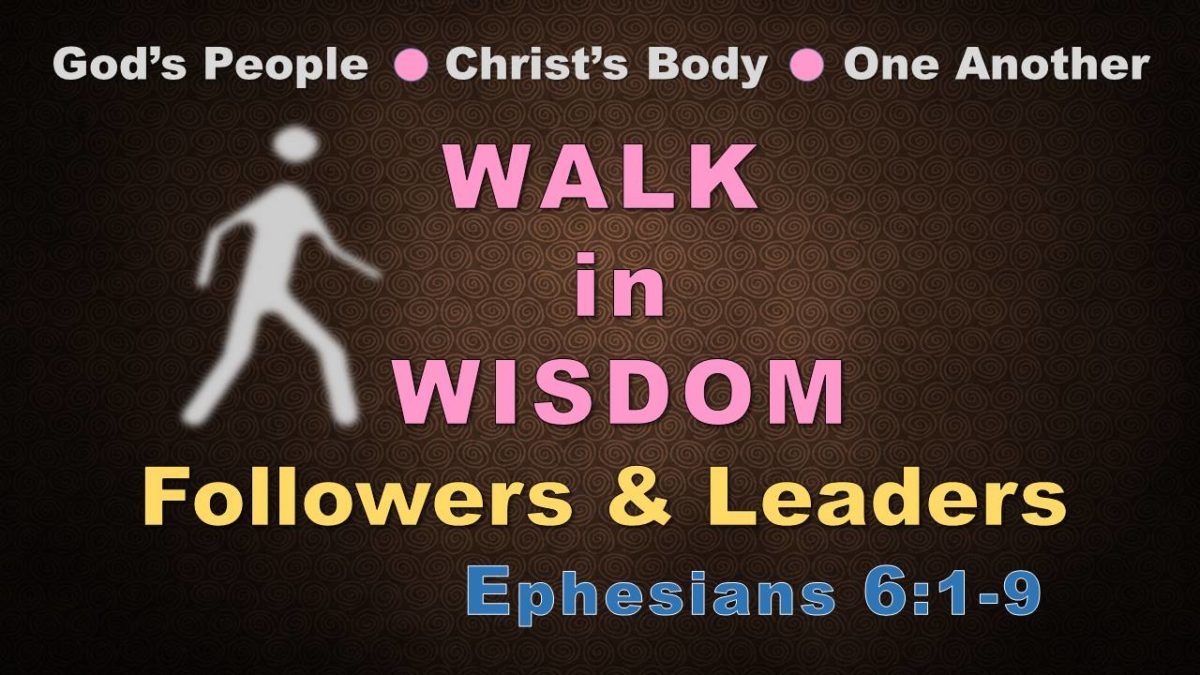 Last week’s message and post from Ephesians 5.22-33 dealing with the topic of submission took us through some emotionally-charged territory. This week’s passage, dealing with obedience, is not much different

Like we’ve talked about, both of these passage belong to the same basic unit in Ephesians. In 5.18 we’re told to ” … be filled with the Spirit.” The Spirit, then, equips us to submit to one another out of reverential awe for Christ Himself.

How then do we show this reverence for Christ in our various human relationships—as wives and husbands, children and parents, “bondservants” and leaders? That’s where we’re going with this …

Children … obey your parents, because this is right (:1-3). Have you, parents, ever given the because-I-say-so answer  to the adolescent-cheeky “why?” question? Paul shades in that direction here: Because God has set things up so that children serve Him by obeying their parents. That’s why. But, he really does better than that. He quotes the law, the Ten Commands, “Honor your father and mother (this is the first commandment with a promise)” (6.2; Ex 20, or Deut 5).

But, wait! says the teenager. That’s not the first commandment; it’s the fifth. Right you are. But how else are children to know the commandment “You shall have no others gods before me” (The First Commandment)? The Fifth Commandment (also thought by some among the ancients to be the first of the commandments dealing with human relations) functions as a kind of primary commandment for children. Honor and obey your parents and you will (generally speaking) live a long and prosperous life.

And, as with submission, Jesus honored this commandment with His own obedience to His Father in the work of redemption, didn’t He? It’s critical to see, how with the example of Jesus, both submission and obedience turn from the negative to the positive.

Parents … don’t frustrate, but disciple and instruct (:4). Now, fathers, in particular, are addressed with their own imperative. While our children are learning their obedience, we’re to make this obedience as sweet as possible.

“Fathers, do not provoke your children to anger …” How do we do this, Dads? Maybe, by demanding perfection according to some standard of our own. Or, maybe, by being passive and unemotionally unresponsive.

As I’ve pondered the connections within this teaching, it seems we frustrate most when we try to modify behavior without being concerned for the inner attitudes of our heart. Maybe, we can get away  with this when the child is very young: “Don’t run in the street!” But, as our children grow into the later elementary years, we get called out on this one.

Positively, “bringing up” has about it the idea of nurturing. And then “discipline” carries with it the idea of activity—doing something together where there is practice with correction. “Instruction” carries more of a verbal idea. Now, the child is being spoken to about what’s going on. The picture I get here is of a father with his son or daughter talking their way through life together. The father isn’t just aiming for right behavior, but the heart!

Dads, where are we doing this with our kids? Where are we (in activity and words) contending for our kids in those matters of the heart where we can’t obey for them?

Those accountable to others … obey those who lead as you would Christ (:5-8). In the second half of this double-header passage, it’s important to identify what we’re NOT talking about. This is not chattel slavery (the horrific practice of our own nations’s past!), but bonded service. People in the ancient world could enter into bond service for a variety of reasons—like not being able to pay their bills, or not wanting to pay high taxes. And, sometimes, life might not be too bad for the teachers and accountants and household managers who found themselves in bonded service.

Still, they were not at their liberty. ” … obey your earthly masters … as you would Christ,” they are told. Significant here is the little distinction ” … masters, according to the flesh”. These are your overlords for now, in this life at the most, but not forever. You’re to serve them “as you would Christ”—with “fear and trembling … a sincere heart … not by the way of eye-service, as people-pleasers … doing the will of God from the heart … rendering service with a good will as to the Lord” (:5 … 8).

The reason given is that social status won’t be important in the future, but spiritual condition will. And, there will come a day of reckoning when our hidden service will be returned to us (Think: 2 Cor 5.10).

Curious, isn’t it, that Paul isn’t a social revolutionary. While encouraging bondservants to get their freedom when they can (for example, 1 Cor 7.25), he’s more interested in seeing individuals grow in godliness within the social norms that exist. Once again, emotionally-charged stuff for us Moderns.

Those accountable for others … don’t threaten, but know your own Master (:9). ” … do the same to them, and stop your threatening,” masters are told. In other words, all that has been said regarding bondservants is true for those accountable to God for them. And when the day of accountability comes, there will be no partiality with the judge. Partiality, “to have a face.” God isn’t going to give a pass because we had face recognition in this life.

To walk in wisdom (whether accountable to others or accountable for others) follow or lead in obedience to Christ.

We move back and forth between following and leading, don’t we? Typically, we’re doing both at the same time in our different roles. But, whether we’re following (as a child or one who is accountable to another in a job or position) or leading (as a parent or in some supervisory role), we’re doing so in obedience or disobedience to Christ.

How is your heart doing in these different roles? Are you consciously aware that you are serving Christ?