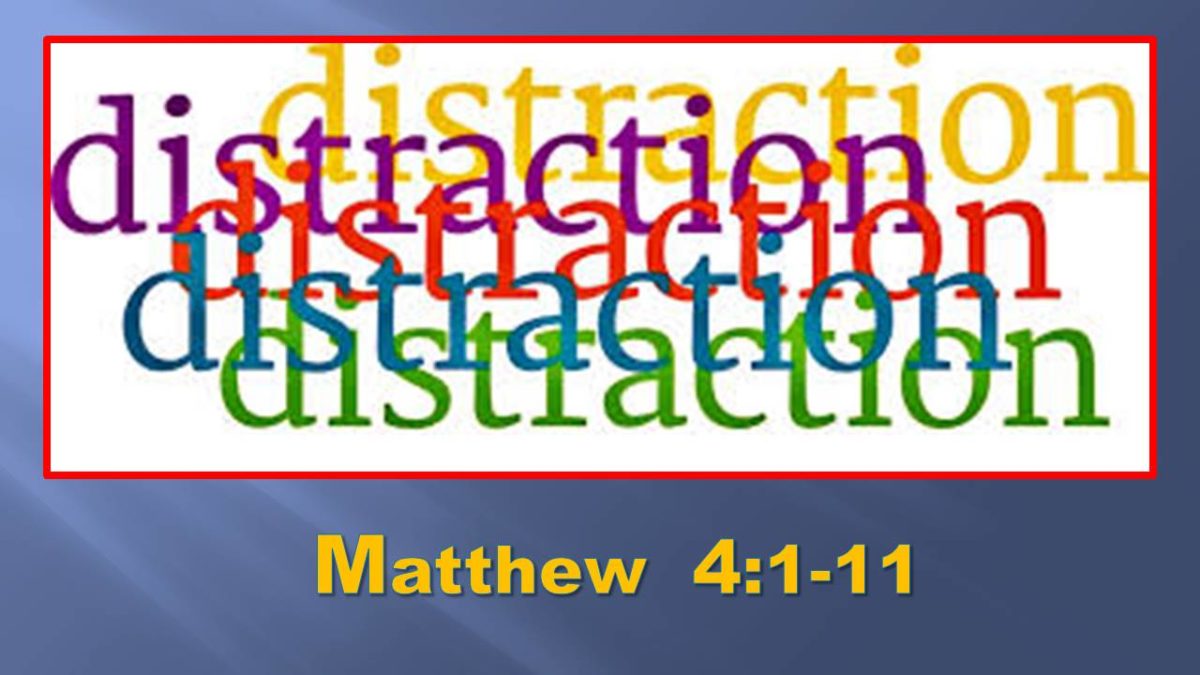 This is a weekend for grads. Congratulations to each of you!

But especially in your happy time, there’s a message for you (and the rest of us, too): Somebody wants to distract you. Using morally neutral stuff, like technology, or using what the Bible calls your “flesh,” there’s an enemy who wants you to lose your first love, to make you unfruitful and unproductive for God …

Jesus knows about distraction. And He’s the only one who has ever responded rightly to distraction. In Matthew 4.1-11, the passage we typically call The Temptation of Christ, we encounter a recasting of the ancient struggle between God’s people and God’s adversary. This battle started (as far as humanity is concerned) in the Garden of Eden where our first parents were distracted and failed. God’s people fought another round in the wilderness when Israel complained and failed. Now, on the way to the cross, Jesus will be allowed to entertain the possibility of taking what is rightfully His, but without having to die. That’s distracting!

Will Jesus be successful where Adam failed? Will Jesus obey God where the Nation of Israel wandered for forty years? In Jesus’ encounter with the Devil the plan of redemption seems to ride on the edge of a knife.

Read Matthew 4.1-11, why don’t you? When you do you’ll see Jesus in the wilderness, preparing for His mission of redemption, but “hungry” and vulnerable to distraction. You’ll also see that Jesus’ obedience to God, despite distraction, is why He is worthy to represent sinful humanity to God.

Distraction #1: Desire of the body (:3-4). Satan begins his attack in verse 3: “… if you are the Son of God, command these stones to become loaves of bread.” Notice that Satan assumes the truth of who Jesus is. It’s like he’s saying, You are the Son of God. I know it, and you know it; so just take what’s yours? Exercise you rights!

“Man shall not live by bread alone, but by every word that comes from the mouth of God,” Jesus responds (:4). Notice that this is a direct quote from Deuteronomy 8.2-3 where God has allowed Israel to be tested, but the Nation wouldn’t be satisfied in God. In contrast to Israel, Jesus is saying, If my Father wants me to endure this test, I won’t satisfy my need apart from Him. Real life is obedience to God and His Word. And God will meet all my needs, even in ways I don’t expect.

Notice also that Eve’s distraction resulted in her taking the fruit that she deemed “good for food” (Genesis 3.6). Jesus passes the test where both Israel and our first parents failed; and not just because He didn’t act on His own terms, but because He actively took refuge in God and God’s Word.

Distraction #2: Desire of the eyes (:5-6)—including the desire to be popular and spectacular. Jewish tradition at the time, based on Malachi 3.1, said that when Messiah arrived he would appear in the sky over the Temple. So, Satan (mis)quotes Psalm 91.11-12:” … on their hands they will bear you up, lest you strike your foot against a stone.” Make yourself spectacular, and the people will follow you, he says. Notice that Satan passes over verse 1 from Psalm 91, “He who dwells in the shelter of the Most High will abide in the shadow of the Almighty.”

This doesn’t surprise Jesus. He responds from Deuteronomy 6.16, “You shall not put the Lord your God to the test,” a verse that rebukes Israel for failing to praise God when God really did do something spectacular in providing water  from the rock at Massah. It’s like Jesus is saying, I’ll not do something outrageous thinking that God has to bail me out in a way that will impress everybody. I’ll obey God on His own terms; I’ll take refuge in Him and His Word. Then God will give me my inheritance in His time. Notice also how Eve became distracted by the fruit from the tree that was good for food and saw ” … that it was a delight to the eyes”.

Are we ever tempted by the desire to be popular or spectacular? Jesus knew the temptation to accomplish His end by catching everybody’s attention, but he passed the test where Adam and Eve and Israel all failed. Jesus took active refuge in God.

Distraction #3: Desire for glory and abundance. In a last effort Satan offers Jesus everything that belongs to him but in exchange for worship. He’s really suggesting that Jesus claim everything that’s his, but by-pass the cross. And where would that have left us? Dead in our sins, right? And where would that have left Satan? Continuing to reign as the “god of this world” (2 Cor 4.4). Satan’s quarrel is not with us, but with God; he wants to share God’s glory.

Jesus responds by quoting Deuteronomy 6.13 and 10.20, “Be gone, Satan! For it is written, “You shall worship the Lord your God and him only shall you serve.”

Where Israel showed what was in their hearts by turning to other Gods, Jesus will honor His Father alone. Where Eve knew that the fruit of the tree was ” … desirable to make one wise” (according to ones own estimation), Jesus embodied true wisdom and took refuge in God.

Jesus’ obedience to God is why He is worthy of my trust in my distraction. There’s one more layer to this textured account that involves Eden and Israel, because it also involves us.

First John 2.16 reads, “For all that is in the world—the desires of the flesh and the desires of the eyes and the pride of life—is not from the Father but is from the world.” My struggle with distraction is also a recasting of Eden—only, when I respond rightly, I get to follow in the footsteps of Jesus, not Adam and Eve.

We’re saved by grace through faith in Jesus, who responded rightly to distraction and went to the cross. My growth in holiness involves a struggle, while we wait for Jesus to return for us.

How is the battle going for you? If you’ve trusted in Jesus by faith, then you get to occupy the high ground Jesus has won for you. Still (thinking Ephesians 6.10-20), you still have to stand and fight.

Below are some questions that will help us evaluate where we are in our struggles with distraction:

Am I taking refuge in Jesus and His cross in my distraction? You and I will be distracted, but when we are we need to return to the cross and go on in obedience.

Am I laying claim to something I believe God has given me, but on my own terms? Does God want us to be comforted? Yes, but not in any relationship. And ultimately in Him.

Am I laying down boundaries that put me in the right place to hear from God? If you struggle on the internet a smartphone may not be the device for you.

Am I growing in my desire for Christ and His things? Jesus didn’t respond to distraction just by not doing things. His obedience was a positive seeking after God through His Word.

So, grads and everybody. Have a great Memorial Day weekend, and a great summer, and a glorious life. But, remember there’s a real battle going on, and make certain you find your refuge in God alone, because He wants to be God of your distractions as well …