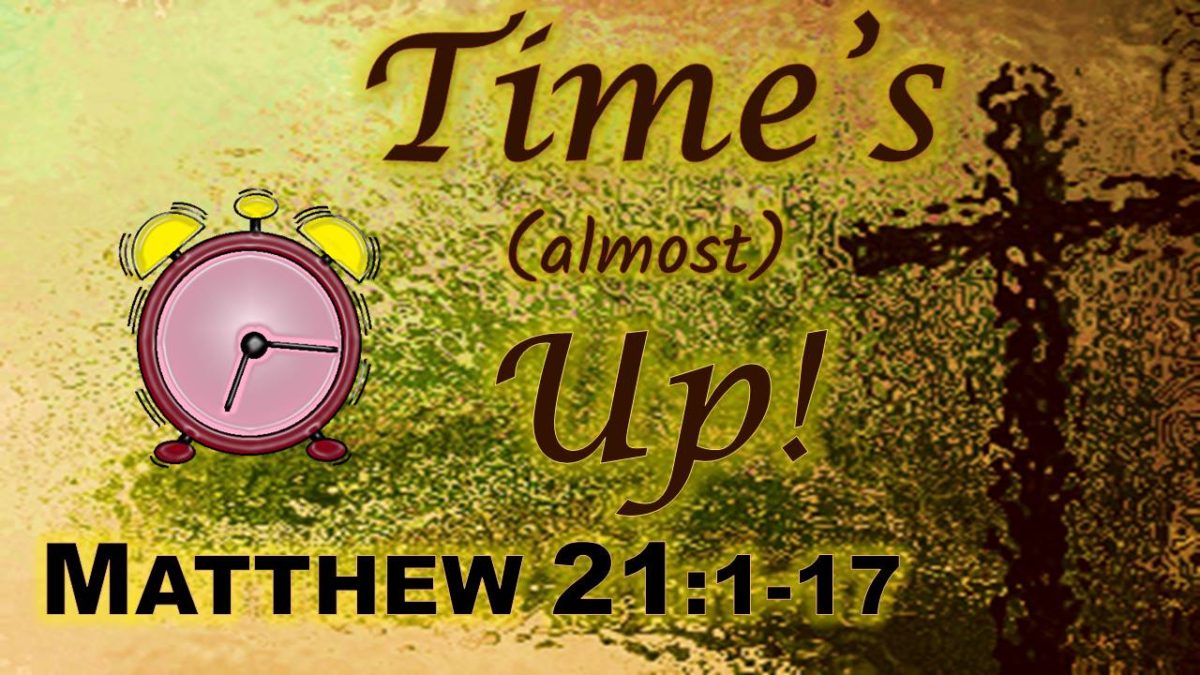 This week at Woodland we’re taking a break from our study of Ephesians to prepare for the great, high holiday of Resurrection Sunday! … Easter, we typically call it. And this Palm Sunday, leading up to Easter, we consider Matthew 21.1-17.

Probably because Amanda, the kids and I have been watching reruns of the The Great British Baking Show (where amateur bakers, working under the press of time and scrutiny of experts, are tested to their limit), I’m impressed with the sense of urgency we find in our passage.

In chapters 19-23, Matthew records Jesus’ humble entry into Jerusalem to show the servant-like manner in which Jesus entered Jerusalem to be rejected as King. And, for all those present, you can almost hear the prophetic timekeeper shouting, “Time’s almost up!”

Time’s almost up, to receive your King (:1-11). From Matthew’s careful account, we see what kind of king Jesus is. He makes preparation for His entry and shows (verse 2) that He knows everything. He knows there will be a donkey and her colt in the village ahead. And, He knows its owners will allow the use of the animals. He has absolute authority (verse 3) and shows this by instructing His disciples to commandeer the animals’ use. And, the king has power as Creator. This is the subtle point made by Matthew (and we have to fill in the gaps here with Mark and Luke) when Jesus chooses to sit astride the unbroken colt, rather than the trained donkey mare.

Most pointedly, the King enters in humility, because he’d come to die. Some, apparently, got the message: Baruk haba beshem Adonai! (“Blessed is He who comes in the name of the Lord!”). Others recognized Jesus as a prophet from Nazareth (verse 11). True, but not the whole truth.

Now is the time to embrace Jesus! This is the message they were to understand.

Time’s almost up, to pledge loyalty to your King (:12-13). After entering the city (Mark shows this to be the next day), Jesus entered the Temple, and we see the rightful fury of the King! Jesus takes over the Temple, so that it might be clear that the way to God is open. In doing so, He restores economic justice, as the poor were apparently being defrauded as they purchased pigeons for sacrifice (Lev 5). Fulfilling Zechariah 14, Isaiah 56 and Jeremiah 7, Jesus drives the money changers from the Court of the Gentiles. Mark 11 adds the full quote from Isaiah 56, “My house shall be called a house of prayer for all nations …” Jesus will soon open the way for all nations to come to God.

Jesus restores the Temple to its purpose as a place where the presence of God could be enjoyed. All of this prefigures the fulfillment of the sacrificial system in Himself. “I tell you something greater than the Temple is here” Jesus has said (Matt 12.6). If the King’s subjects won’t come to God rightly in the King’s Temple, they won’t recognize who Jesus is and pledge their loyalty to the King at all.

Now is the time to embrace Jesus!

Time’s almost up, to recognize your King (:14-17). The message of the Temple cleansing isn’t lost on everyone. Jesus draws three responses from those in the Temple, so that the condition of peoples’ hearts may be demonstrated.

The blind and lame respond. Ironically, Leviticus 21.17 excludes those deformed in body from joining in the worship of Israel, “For no one who has a blemish shall draw near, a man blind or lame, or one who has a mutilated face or a limb too long.” This is a picture of how we only come to God in wholeness. Jesus will soon fulfill the requirements of the sacrificial system: “Do not think that I have come to abolish the Law and the Prophets; I have not come to abolish them but to fulfill them” (5.17).

And, oh how the children respond! They respond and recognize the King. The priests and scribes respond, and don’t like the shouts of the children’s one bit, “Do you hear what these are saying?” they ask Jesus (:16).

Jesus reminds them from Psalm 8 that children must shout!: “Out of the mouth of infants and nursing babies you have prepared praise … (:16b).

Now is the time to embrace Jesus!

As Matthew recounts, the Nation rejected its King. But then, the King offered Himself for all peoples on the cross. And then, the Father raised Him from the dead and gathered Him back to Himself where He makes preparation to come again.

And that’s where we are today. Take a look at Revelation 19.11-16. “Then I saw heaven opened, and behold, a white horse! The one sitting on it is called Faithful and True, and in righteousness he judges and makes war.”

Do you recognize that rider? He’s one and the same as the rider on the donkey. Only, He doesn’t come to die; He comes to reign. “Therefore God has highly exalted him and bestowed on him the name that is above every name, so that at the name of Jesus every knee should bow, in heaven and on earth and under the earth, and every tongue confess that Jesus Christ is Lord, to the glory of God the Father” (Phil 2.9-11).

There’s two groups of people who enter into the Easter Season this year. There’s those who play at welcoming Jesus. Maybe, some believe right things about Jesus (“the prophet from Nazareth”), but they aren’t depending on Him. These need to consider that Jesus really died … and really arose from the grave … and really went back to the Father, where He prepares to really return! And, time’s almost up to embrace Jesus.

There’s also others who have trusted in Jesus, but could (for sheer busyness and distraction) miss the opportunity to consider Jesus in the next week. For us, the need to keep on depending on Jesus is just as vital as our need to depend on Him was in the first place.

Palm Sunday is a wake-up for us each year, isn’t it? This year, let’s read those familiar passages in Matthew, Mark, Luke and John with new vision. And then, let’s respond with urgency, dependence and thanksgiving.

And, let’s embrace Jesus, our King!

A few questions for you to consider with others:

How is our urgency both different from  and the same as those whom Jesus first visited at his first coming, as the King of the Nation of Israel?

How do you feel about the Easter season? What frame of mind does the season usually find you in? Are you typically flat-footed spiritually coming into these weeks? Or, are you typically ready?

What typically helps you prepare your own heart to contemplate Jesus and His work at the cross?

How can we help each other prepare?