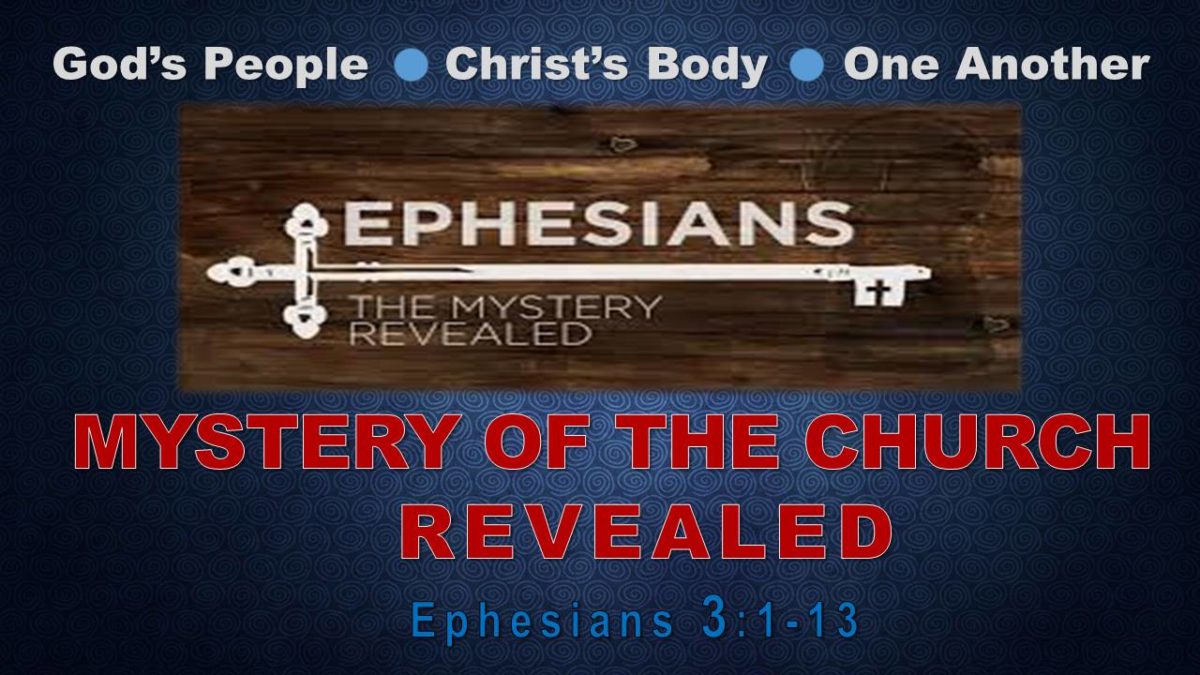 Some years ago (when the kids were small, actually), Amanda and I got into watching mysteries. We started with Monk, then moved to the British variety—Foyle’s War being our favorite. Sometimes, we’d stop the disk to ask each other, “Who done it?” But, funny thing, we’d find that we could almost never predict the ending.

You see, good mysteries have unforeseen twists. Great mysteries, we came to find out, have twists that are also organic to character and plot development: looking forward, you can’t see what’s coming; looking back, it’s believable. And then, when the mystery is revealed, everything comes to light, and all the labor and toil of the mystery screen writer pays off.

In Ephesians 3.1-13, Paul describes the Church of Jesus—the new people, created in Christ, in whom God takes up His dwelling (2.11-22). This new people results from the Gospel and is the mystery nobody before Christ could foresee. The effort and toil and tribulation of bringing about the growth of the Church is worth it, because the Gospel results in glory!

Mystery of the Church made known (:1-6). In this most autobiographical of all passages in Ephesians, Paul reminds his Ephesian readers of his suffering on their behalf. Then, the Spirit of God (we believe) redirects him into a long digression on the mystery of the Church. Only in verse 13 does he reconnect with his original thought.

A lot is going on in Paul’s jail cell, as he awaits trial in Rome. Acts 21-28 gives the background. Originally, shortly after Paul and Silas’ return from their 3rd Missionary Journey, Paul is arrested in Jerusalem for turning Jews against the Law of Moses and (allegedly) bringing an Ephesian (it so happens) into the Temple (Acts 21.27-29). Now, some years later, the appeal process runs on, and Paul writes his Prison Epistles from Rome.

I’m suffering for you, he wants the Ephesians to know. But, wait! Here’s what’s really going on … You are a part of a mystery (something hidden in the past, but now made known) that God has revealed by revelation. This mystery, that the saints of old couldn’t see has now been revealed to Apostles and prophets—this mystery is, in fact, the truth that Gentiles who have trusted in Jesus are knit together into one, new people with believing Jews. All this take place because of the Gospel.

Mystery of the Church ministered in the Gospel (:7-12). The wonder of it, Paul continues, is that I have been made a minister of the Gospel, charged with explaining this mystery of the Church revealed. Because of this Gospel, the wisdom of God is made known to angelic rulers through the Church (:10); God’s plan of salvation is shown to have been accomplished in Christ (:11); and, access is made to God by the work of Christ and received by faith (:12). That’s a pretty great twist that “solves” our need for redemption! But, is it worth it?

Mystery of the Church made glorious! (:13). So, I ask you not to lose heart over what I am suffering for you … Paul asks of the Ephesians. And, why? Because, it is ” … your glory”.

The mystery of the Church revealed is glory! For God, for the Ephesian believers, for us today …

You see, in his personal appeal to his Ephesian believers, Paul is moving toward the practical. He understands that while the creation of one, new people in Christ is the result of God’s resurrection power received by grace, there is trouble involved. There’s pain in bringing the Gospel to those who were “far off” from God (2.13). And, after the fact, it’s hard for unlike people to live as one people.

Consider our local expressions of the Church of Jesus—your church. Imagine your church is joined by a family living the American Dream—2.4 kids, parents happily married, new cars, nice vacations. But, they’re lost. Then, by God’s grace, they get it: your new family understands that God doesn’t care about the American Dream, and the different members of your new, church family trust Christ. Another family joins, third marriages for both parents, kids on drugs, relationships deteriorating. But, they, likewise, trust in Jesus. Now, members of both families are “in Christ”.

Both families come to God the same way. But, will it be easy? Sure, there’s grace, and they will both grow as members of your local church, but that’s it, really: they will have to GROW. And, that growth requires the spiritual living Paul will now begin to describe in next week’s passage.

This is the good stuff in the local church. Seeing different kinds of people come together in God’s new people, the Body of Church, the one-another membership of His new creation. And, like Paul told the Ephesians, we must not “lose heart”. It’s worth the toil, because God is all about bringing Himself glory in His plan of redemption. And this, in the end, is our glory.

Here’s a few questions to keep us thinking about the mystery of the Church revealed:

What about your local church do you find unlikely? If you have trouble with this, think first about the aims and goals of a business or community organization. Then, think about how your church is different.

How do we share Paul’s responsibility to make the revelation of the mystery of the Church known? Sure, there aren’t any capitol-A apostles going around anymore, but the Church hasn’t changed, and God’s purposes (:10-12) haven’t changed.

The big issue in the Early Church was Jew and Gentile relations. What issues does your church face? Think: socio-economic status, levels of family functionality, racism, “insiders” verses “outsiders,” if you’re a place with a strong, local history.

What exciting things are going on in your church as people trust Christ and are knit into one, new people?