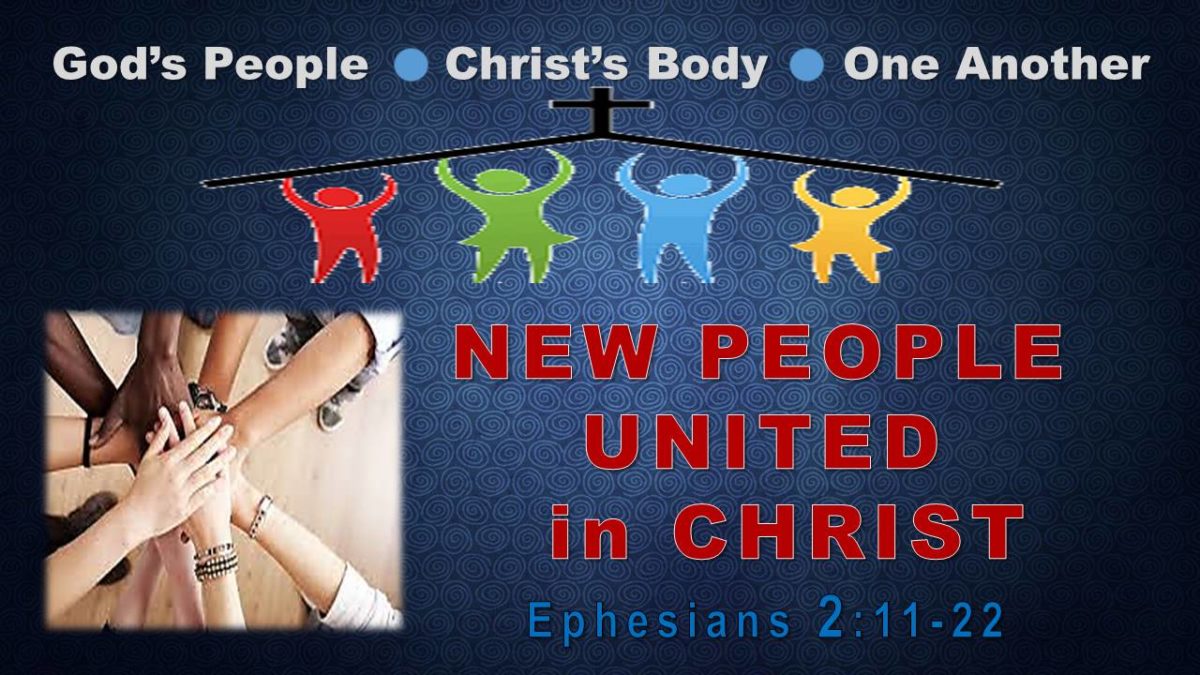 Is the church relevant to your life? It wasn’t always to me, not quite.

Amanda and I met in church, and we were committed. But, vocationally, we were “para” to the church. Our first ministry together was in Germany with a Russian-German immigrant Bible school. So, in the land of Luther with its glorious Christian past and the remnants of flourishing faith all around us in beautiful architecture, we set off to serve Christ. In the next few years something happened that moved me in my understanding of the relevance of the church to my life …

In Ephesians 2.11-22, Paul takes care of some Ephesian local church business. He’s going to talk about Jews and Gentiles, circumcision and covenants of promise. Sounds 1st century, doesn’t it? But, in going there, Paul is going to show us who the church is, where it came from, and why it’s relevant to our lives today.

The church is one, new people, brought near to God (:11-13). Peering back to the time before Christ, there’s two groups here. Those who were “near” to God included Abraham and his physical descendants who carried the mark of belonging to God (see Gen 17.14). That was God’s idea, at the time. Even so, there’s indication that the mark alone, ” … made in the flesh by hands …,” was not enough alone to make one right with God.

Then, there were those “far” from God. This would have been most of us … without Christ … alienated from Israel … strangers to the covenants (think: unconditional covenants, the Abrahamic, Davidic and New) … no hope … without God. These God brought near through the crosswork of Christ: “But now in Christ Jesus you who once were far off have been brought near by the blood of Christ” (:13).

What results is one, new people, at peace (:14-18). Jesus made the two peoples one. He did this by breaking down the hostility between them and rendering inoperative what separated them.

This is the technical part of the passage. Basically, Paul is referring to the Law of Moses, based in the Ten Commandments and including the 600-some-odd requirements of the law we find, mostly, in Exodus and Leviticus. These had special significance for Israel, since obeying this law determined whether the people would be allowed to remain in the Land of Promise. The problem: nobody kept the law, except Jesus. But (good news!), when Jesus kept the law and took our law-breaking on Himself, we ceased to be judged by whether we’ve kept the law and are now judged by whether we are “in Christ” by faith in Him. We’re saved by grace through faith (2.8-9).

Now, we are one, new people, the dwelling place of God (:19-22). Today, in Christ, Gentiles like me are no longer visiting God’s people. We belong to God’s people, along with Old Testament saints, like Abraham, Moses and David. The worldwide Church of Jesus is built on the testimony of the Apostles and the Word of God, first voiced through prophets. We’re centered on Christ, the cornerstone. And, we’re growing up into a new temple where God meets with His people.

Astounding! In the Old Testament those carrying the physical mark of belonging to God could enter the Temple and meet with God. Today, anyone trusting in Christ can meet with God. But, more, we ARE the temple! This is referring collectively to the worldwide following of Jesus. But, places like Woodland, our local church are “growing up” into local expressions of this temple.

The Church is a new people, united in Christ and the dwelling place of God.

So, returning to our story. Amanda and I cut our teeth together in Christian ministry in a Bible school that operated alongside churches. But, what churches? We attended church, to be sure. We tried the local baptist church, but found it “clannish” (kinda like a big family reunion) and completely disengaged from the community. We eventually joined a “free” (protestant, non-state church) some thirty minutes away, but found it non-serious. (The pastor’s wife would often lead us in a craft as the high point of the service.)

Eventually, we started a neighborhood Bible study in our apartment. While none of our neighbors believed in God, some did come. But, there was something missing in the whole equation. What was it? Then, one day, I had it. While we had a Bible school and a rich, Christian heritage to draw from, we were missing the Church!

The church, I’ve come to believe, is God’s great show-and-tell to the watching world. We are a people drawn near to God … a people at peace, with God and one another … a people who are the very dwelling place of God.

That’s why the church is relevant to our situation, I now know. It’s why I love Woodland and other churches I’ve served. It’s why the very cadence of my week builds toward Sunday morning when I gather with God’s people.

The church is God’s idea!

Here’s a few questions to help us think further about Paul’s teaching in Ephesians 2.11-22:

What has been your experience in local churches? Positive? Negative?

How relevant is your local church to your regular walk with Christ? Can you imagine your life without regularly meeting with God’s people?

Have you ever thought about the church as being the place where God dwells with humanity during this time before Christ’s coming? How does this work? What does this mean?

What bearing does this passage have on the way you view others in Christ’s church? How does your peace with God affect the way you treat His people?

What connection does this passage encourage you to seek with brothers and sisters in Christ you’ve never met?