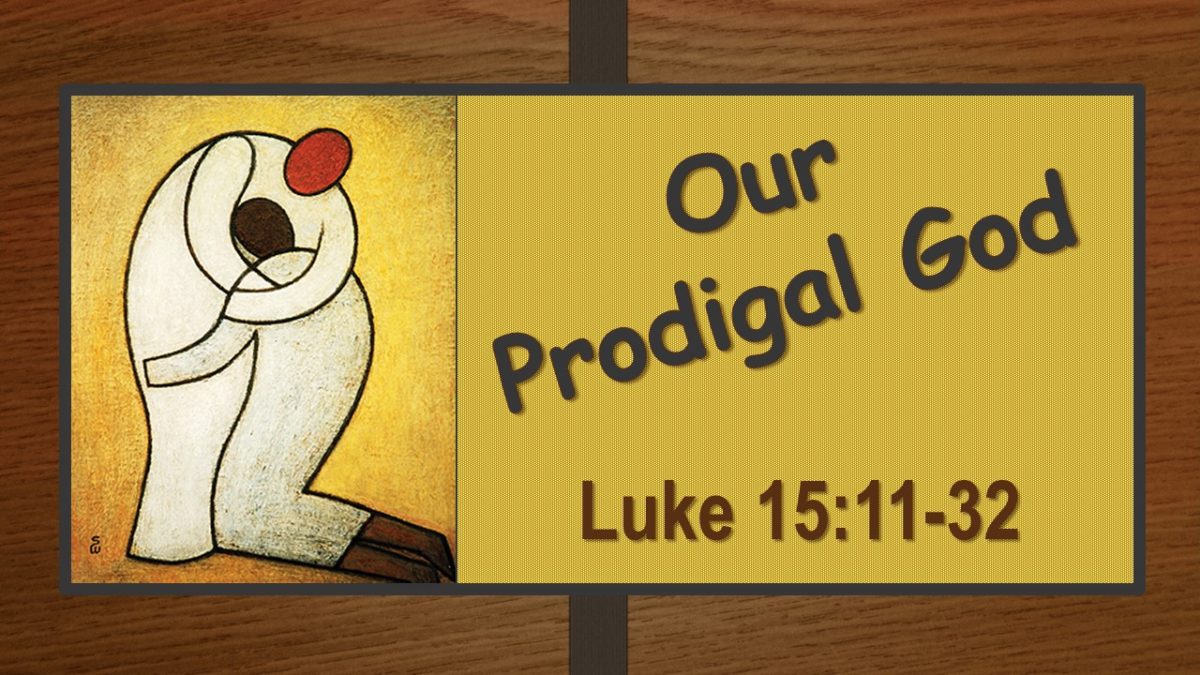 Who’s with Jesus? That’s the question we’re asking this summer at Woodland. Some people in the gospel accounts “got” Him, recognized Him, identified with Him. Others missed Him.

We looked, last week, at two and a-half parables—The Lost Sheep, The Lost Coin and The Lost Son (Act I, 15.11-24). Three separate parables, one point: “Rejoice with me!” the major figures of the three parables say together.

In the most complex of the three parables, the lost son, experiencing his father’s grace, admits his unworthiness, accepts his father’s love and enters into his father’s joy. And, through the figure of the Younger Son, we learn that God’s terms for reconciliation includes grace that preempts our efforts to establish ourselves in His favor.

Wonderful as it is, there’s still more.

Unlike the first part of the parable, Act II (:25-32) takes places in speeches. Listen to the points made, watch how the text is arranged. Jesus hasn’t even made his main point yet to His immediate audience of “sinners” and Pharisees (see Luke 15.1-2). The “smack-down” yet awaits.

Even as the Younger Son has returned from the fields, the Older Son approaches the house, likewise from the fields (:25). Notice, he comes last, like a good foreman shutting down the operation for the day, like a diligent executive, shutting off the lights. As he does, he hears symphonia (the mixed-voiced sounds of laughter and feasting). The fattened calf is slaughtered, “quickly,” we’re told earlier, in time that the workers in the fields might celebrate that evening. “Why was I not invited?” we know he asks.

The Older Son arrives at the house and asks for news (:26-27). We note, along with commentator Kenneth Bailey in Poet & Peasant and Through Peasant Eyes (Eerdmans, 1983) that this is not an American farmhouse, entered through the side and the kitchen. This is a Middle Eastern house with a wall dividing the lane from a private courtyard that stands in front of the house. The invited guests would have been inside. The Older Son stands outside, along with the children and the hangers-on and “keeps on” (imperfect tense) asking for news.

When he learns all that has transpired, the Older Son responds (:28a). He becomes angry and won’t enter the feast. He doesn’t want to distribute his father’s remaining wealth that he supposes to be his. But more, and here we credit Bailey once again, there was a custom throughout the Middle East that the oldest son of a hosting nobleman would stand in the doorway barefoot. It is as though the nobleman was saying to his guests, “Even my oldest son is your servant.”

And again, what was Jesus criticized for, in the opening verses of the section (:1-2). Hosting sinners, right?

The Father leaves his dinner guests, humbling himself, to enter the courtyard, to plead with his son (:28b). The Older Son responds to the Father. “Look (you!) … ” This is hardly the way to address the paterfamilias. “For these many years I’ve served you …” This isn’t son talk at all, but slave talk.

“You never gave me a young goat, so that I might celebrate with my friends. But when this son of yours came, who has devoured your property with prostitutes, you killed the fattened calf for him!” the Older Son continues (:30, ESV).

Note the emotional distance from the family: “This son of YOURS.” And, note the Older Son’s concept of joy that includes a good time with friends and that doesn’t include the Younger Brother or the Father. He’ll have meat without family fellowship; he’ll work to take the benefits of sonship, while living on his own terms. He’ll establish himself apart from the Father. And what was the sin of the Younger Brother?

Tim Keller, in his The Prodigal God (Dutton, 2008), in which he interacts with Bailey’s work and to which I’m much indebted for this reading of the parable, remarks at this point,

The elder brother is not losing the father’s love in spite of his goodness,  but because of it. It is not his sins that create the barrier between him and his father, it’s the pride he has in his moral record; it’s not his wrongdoing but his righteousness that is keeping him from sharing in the feast of the father (35).

The Father responds to the Older Son (:31-32). “Son,” he says, in a unique use of the word (much like I speak to my two sons when their fishing lines are tangled, but they choose to cast them anyway), “You have always been with me, and all that is mine is yours.”

Here, the Father reminds the Older Son that he, the son, is the heir. But, the Older Son is not content. He would, like his younger brother, have the right to distribute his father’s wealth. Is he not likewise saying, “I wish you were dead!”?

And so, the Older Son, experiencing his father’s grace, claims that which he perceives to have earned, judges his younger brother, rejects his father’s love, and—by refusing to enter the feast—demonstrates that all these years he has been lost in his father’s house.

Thus ends the parable … Or, does it?

We noted last week that a parable is much like a joke. Both have a response. To the joke, we laugh (hopefully). To the parable, there is a life response. What response would Jesus ask of His audience? And, of us?

Among Kenneth Bailey’s contributions is his structuring of the second half of this parable. He notes (191) that the scenes move from the Older Son drawing near the feast, to the reason for the feast (spoken by the servant), to the Father’s pleading, to the Older Son’s first complaint. Then, the second half unfolds in mirror image fashion—the second complaint, the continued pleading of the Father, the summary of the reason for the feast, and then …??? What would we expect? Why, we’d expect the Older Son to enter into the feast!

That would be the perfect fairy tale ending the form demands. It might go something like: the Older Son, upon experiencing his father’s grace, entered the house, reconciled with his brother, joined in the music and feasting, and so his father once again had two sons.

But, our imagined epilogue doesn’t end that way. I’ll credit a missionary to Egypt named Mike Kuhn with another possible ending to the parable: And the Older Son, spurning his father’s grace, raised his staff and struck his father over the head. And, while the Young Son and the guests looked on, beat his father repeatedly until his father was dead.

That’s how the parable ended in the life of Jesus. And, it was in killing Jesus that the Pharisees and other “older brothers” showed what they really thought of God’s grace.

But, there’s something else missing. How about the theme of seeking? In the The Lost Sheep and The Lost Coin the hero was the shepherd and the woman who assumed the burden of restoration, until the lost one was restored. Who was to do the seeking in The Lost Son? Could it not have been the Older Son?

Philippians 2.5-8 tells us that Jesus ” … did not count equality with God a thing to be grasped, but emptied himself, by taking the form of a servant, being born in the likeness of men. And being found in human form, he humbled himself by becoming obedient to the point of death, even death on a cross.”

Jesus is the older brother that the younger brother in the parable never had. And, as such, He is our older brother. In leaving the Father’s house, He humbled Himself, united us back to the family through the cross and then dispersed the Father’s wealth.

If a parable requires a life response, what is it that the Father is asking us to do? How about imitate Christ in His humility? How about going in search of our lost brothers to invite them to the feast, through Jesus and the Gospel? How about being “prodigal” in grace?

In The Prodigal God Keller reminds us that “prodigal” means “reckless, extravagant, having spent everything”. Have we not misunderstood the word? And, in being glad that the Younger Son finally got it together and thinking that the Older Son needed to shape up, have we often misunderstood the parable?

The real hero of the parable is the Father who graciously, generously, prodigiously disperses His riches to all who would come to the feast.

And so, having come to know the heart of the Father, we must seek others with whom to share the Father’s joy.

After spending some time with Luke 15.11-32, find some others with whom to discuss these questions:

How does this reading of the parable challenge the way you’ve always understood it?

Where is God asking you to be “prodigal” in your understanding and display of grace?

Who was it that came looking for you in a distant country before you knew Christ?

Whom do you need to seek?