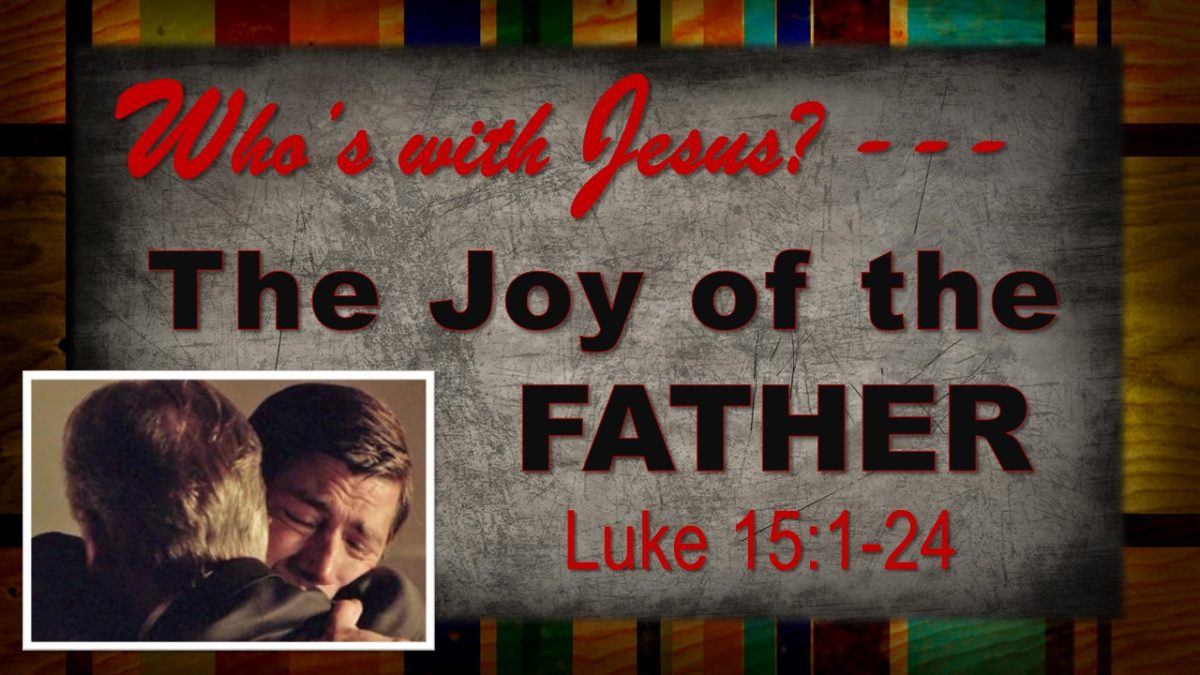 This summer at Woodland we’re considering the parables of Jesus. With each spiritual lesson couched in a story from common life, there were (and are) those who “get” (understand, recognize, respond to) Jesus. And, there were those who miss Him.

Parables are like jokes. There’s the set-up, the punch line, and the smack-down. The irony of the art form (and Jesus was the best of artists) consists in getting the hearer leaning one way, and then —BOOM!—taking him down.

In Luke 15, Jesus responds to a group of Pharisees who reacted to Jesus when he “ate with,” (or, hosted) sinners. Three parables result, two and one-half of which carry the same point.

In The Lost Sheep (:1-7) A seeking shepherd restores his flock. There’s tight structure here. The little prose poem begins and ends with a flock of 100. Likewise, there’s parallel ideas of a lost sheep and a repentant sinner. At the center of the construction there’s the joy of the shepherd: Rejoice with me!

Similarly, in The Lost Coin (:8-10) a woman searches for a lost coin. Once again, the rhyming of ideas (so typical of Eastern and Hebrew thought) produces an idea at the center: Rejoice with me!

Both short parables push Jesus’ pharisaical hearers. They’re asked to compare themselves first to an (assumedly) ceremonially unclean shepherd and then a (culturally, in the day) socially-subordinate woman. There’s a cluster of themes: lostness … repentance … restoration … completion … the burden of restoration shown in the seeking. Both parables are virtually identical—except that the coin is lost, not in the wilderness, but in “the house,” a potentially significant detail.

In both parables, we must ask, Who’s the hero? Certainly not those lost, or having no need of being found, but the one doing the seeking. Hang on to that idea …

At last we arrive at the parable of the two(?) lost sons, commonly known as The Prodigal Son (:11-24). The very well-known story unfolds in five scenes:

The death wish (:11-13). Here, the younger of the two sons asks for his cut of his inheritance. New Testament commentator, Kenneth Bailey, long-time resident of the Middle East and author of Poet & Peasant and Through Peasant Eyes (1983, Eerdmans), reports that in hundreds of interviews with Middle Eastern noblemen the overwhelming response to the question, “What would you do if your son were to make such a request?” was “I’d beat him!” The son wishes for nothing short of his father’s death. Notice, the older son, standing to benefit by up to two-thirds of the estate, merely sticks out his hand.

The downward spiral (:14-16). The son goes to a distant land and divests his father’s wealth. Tempted as we are to see the son’s sins as only moral, the main idea here is that he was simply a spend-thrift, seeking to win friends and influence people with his father’s estate. Rather than seeing him going off with a rock band and a Volkswagen bus, we ought to see him seeking to establish himself among sinners apart from his father. But, “when he had spent everything,” famine strikes. The son attaches himself to a well-to-do resident of the land, who (politely) attempts to get rid of him by giving him the undesirable task of feeding pigs—repulsive for a Jewish boy.

The transition: coming to self (:17-19). “When he came to himself …” (ESV), the son makes up a speech. He’ll move back to his village and work as an independent contractor. Maybe, he can live in town. He won’t have to face his older brother, and he can start paying his father back. The absence of the proper word for servant (doulos) is conspicuous. He’ll be a misthos (hired man). And, as such, he’ll be his “own man”. Important to the story is that repentance does not necessarily take place here. He’s not necessarily sorry, he’s hungry.

The grace of the Father (:17-19). We see the son approach the village and ought to imagine children throwing sticks and stones and mud. This one has squandered the estate among Gentiles. In a Palestinian ritual known as kashasha (so, Bailey), the son has been cut off from his people. But then, “while he was till far off,” his father bares his legs like a schoolboy, and runs!

The joy of the Father (:22-24). At their meeting, the son attempts his prepared speech, but is interrupted. Attempts to kiss the hands of his father are pre-empted by his father’s embrace, and the kiss of Shalom. ” … bring the fattened calf and kill it,” his father orders,”And let us eat and celebrate. For this my son was dead, and is alive again; he was lost, and is found. And they began to celebrate” (:24).

And here, so we contend—at their joyful meeting—repentance takes place! The son can’t be anything but a son. And, the father hosts the son and the whole village (Think of Jesus’ immediate context and his accusers.)

The parable, at this point, leaves us hanging. (There’s still a smack-down in store.) Amidst the thematic cluster of lostness, repentance, restoration, home and celebration, we have yet to answer the question, Who ought the hero to have been? Who should have done the seeking?

Even so, there’s much to be harvested at this point. From the younger son, we learn: we may always come to God, but we must come to Him on His terms, not ours. And, if we would come, we will only be sons, not hired men.

From the Father, we learn the lesson that stands at the center the trilogy of parables in Luke 15 (so far): God’s terms for reconciliation include grace that pre-empts our efforts to establish ourselves in His favor.

Both lessons cut against our pre-conceived notion of our character and God’s. “We’re able to engineer our relationship with God” …  “We’re our own men” …  “We’ll come back when we’re ready,” we might think with the son. But, as we learn from the Father, God’s grace, know to us in Jesus and His cross-work, pre-empts our plans. God rejoices in the work of His first Son that brings about reconciliation with His other sons.

“But now in Christ Jesus you who once were far off have been brought near by the blood of Christ” (Eph 2.13, ESV) … Rejoice with me!

Circle up with a small group and ask and answer these questions from Luke 15:

How do the three parables of Luke 15, when read together,  help you understand the main point of each?

How is this reading of The Prodigal Son different from others you’ve heard? What do you see now that you’ve missed in the past?

What about the response of the Father in the parable surprises you the most?

What’s missing now? Where do you think Jesus is going with the second half of the third parable?