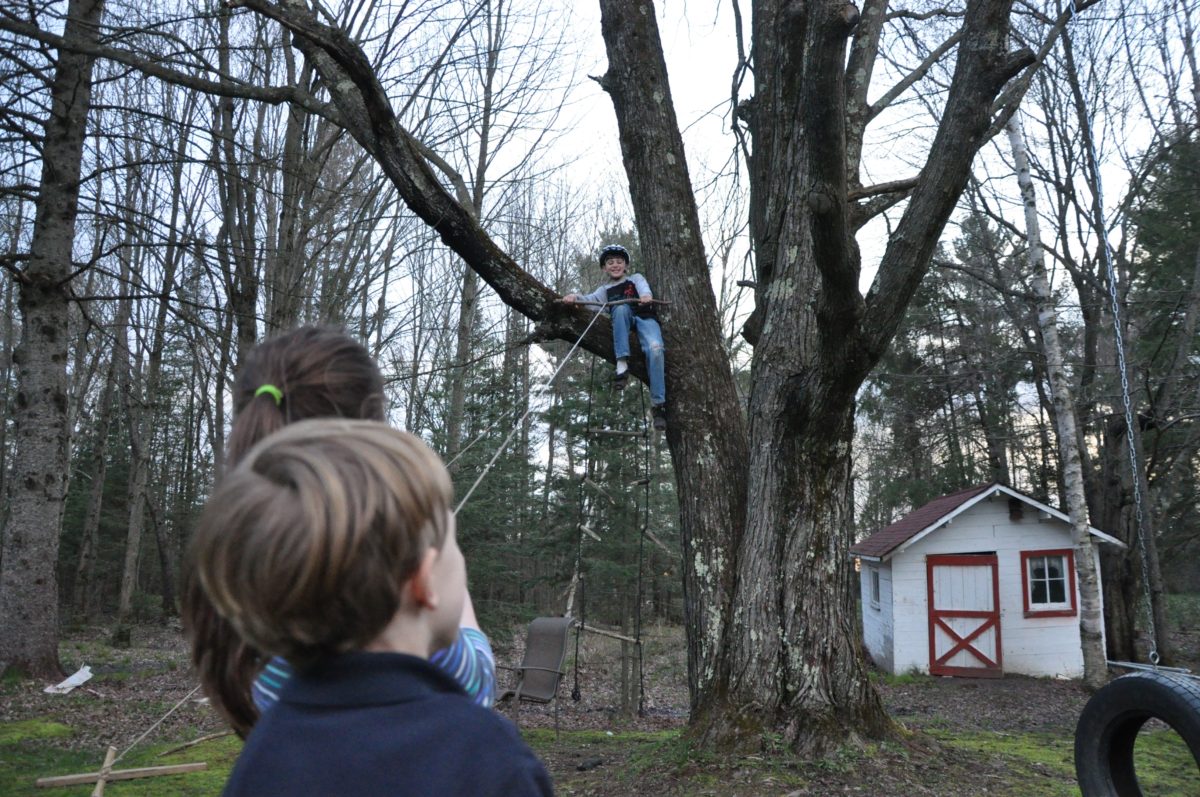 And, just like that, our Northwoods winter turned to mud, and then to spring, and now to … summer!

There’s projects afoot. Raised-bed garden and hoop house, for me. Beds and beds of perennials to plant, for Amanda. Acres to mow with our old push-mower, for Katja and Jack. And then, the work in the forest that must wait for another season.

My favorite projects remain the fanciful ones deep in the timber. There’s the log cabin the boys began constructing from fallen spruces—logs cut two meters in length with my old German Meterstik (measuring stick) and my handsaw. (The boys say they’re waiting for me to buy a chainsaw before finishing the project … )

There’s Jack’s live trap—a thing of beauty, of hope and of imagination. He’s threaded a snare he learned to tie from watching internet videos. And, he’s driven a stick into the ground and spiked it with a hunk of cheese. This he’s wired to a separate tension lever, just waiting to be tripped. The mechanics of the machine are abundantly clear to a ten-year-old. The animal will position itself squarely in the middle of the snare, seize the bait, and then be flung with overwhelming force against the tree, at the base of which it will lie, stunned, till Jack finds it in the morning. What he will do with the critter, Jack doesn’t know. But, his childlike wonderment places all within the realm of probability.

Then, there’s the zip line (pictured above). Each of our older three (Gigi excluded) takes a turn in the big maple we call Friendship. A bike helmet must be strapped on in recognition of the danger of the maneuver. Then, with the other two children pulling vigorously at an ordinary rope, the thrill-seeking subject launches from the tree and ecstatically zips across the side yard. At least, in theory … The reality is what actually happened when Jack flung himself from Friendship and, obedient to some physical law, dropped like a stone where he met dirt and tree roots. Why so? The physics of it all!

And why must it be necessary to grow up, when everything seems possible in childhood?

Far-fetched as this transition might seem, Ephesians 4.15 does spring to my mind: … speaking the truth in love, we are to grow up in every way into him who is the head, into Christ (ESV).

We’ve recently finished our series on healthy church partnership at Woodland. Now, it’s time to gather up all our sessions on membership, generosity, shameless service, and so forth, and simply love one another, … until we all attain to the unity of the faith and of the knowledge of the Son of God, to mature manhood, to the measure of the stature of the fulness of Christ (4.13). That’s growing up together in our local church.

The Regier kids will grow up and (alas!) lose interest in their imaginative, timbered world. And we, as grownups, must, along with the children, grow up too. Material-world mechanics that govern live traps and zip lines won’t be ignored forever. But, neither will the “royal law” of love (James 2.8). The first, we leave behind regrettably (at least, that’s my sentiment as parent to my kids). The second, we all run toward joyfully, since our love for one another in maturity is nothing short of preparation for Christ.

And, that’s the reality we can grow up to.

2 thoughts on “Growing up, together …”