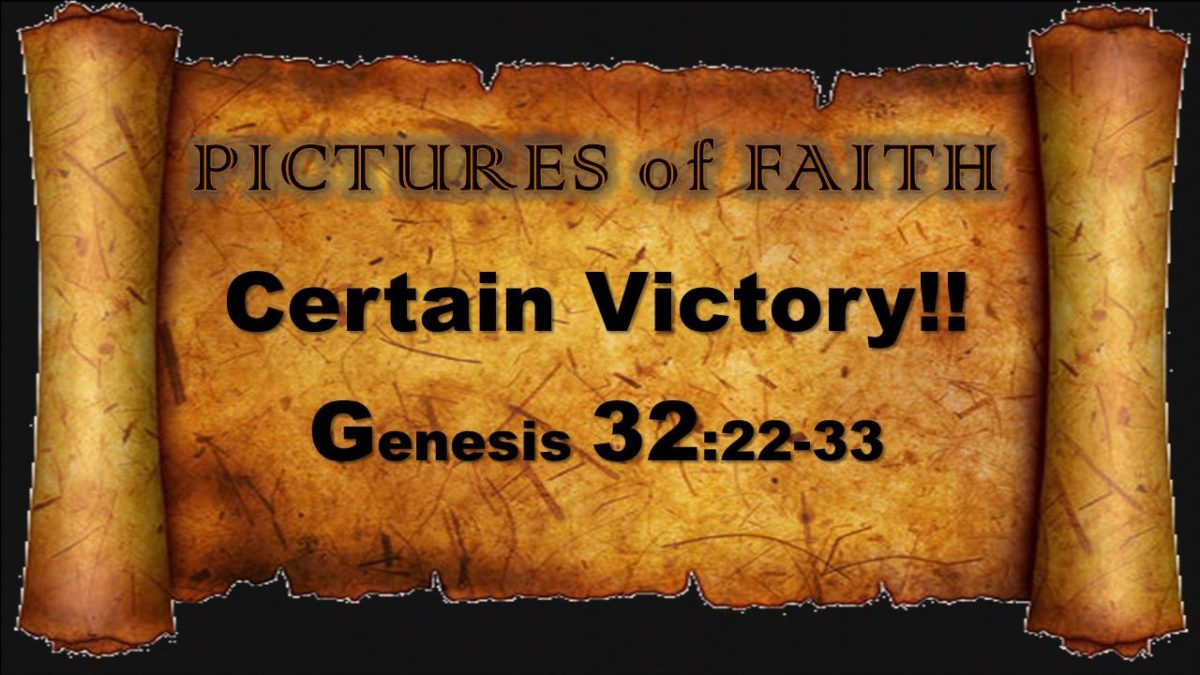 Have you ever striven with God? Do you strive with Him still?

The biblical patriarch Jacob knew a lot about striving—about wrestling, with everybody. Today in Genesis 32 we see Jacob carrying on the family quest for blessing with God. But, will he receive it by faith? Or, will he try to wrestle it from God on his own terms?

Jacob’s grandfather, Abraham, received God’s call in the ancient land of Ur. And, some 2,000 years before Christ, Abraham became the father of all who would respond to God by faith (Genesis 15.6; Galatians 3.7). Taking God at His word (that He would bless Abraham and His descendants with land, a descendant—the promised redeemer, it turns out!—and a blessing for the whole earth), Abraham departed for the land God showed him. And, he became the paradigm for those who are saved by faith—faith in Jesus, for us; faith in a promised redeemer, for those coming before Christ.

Jacob’s striving resulted in his being alone (:22-24a) Jacob had always been a heal-grabber. That’s what his name means. He’d been the favorite of his mother and had always striven for his father’s affection. In doing so, he’d tricked his brother, Esau, out of the family blessing. He’d impersonated his brother in deceiving his father. He’d fled to his uncle, Laban, only to be tricked into marrying Laban’s older daughter, Leah, but had then gotten his uncle back through some brilliant, if pre-scientific, trickery with goats and genetic engineering. Now, Jacob is headed home and must face his brother, Esau. His servants inform him (32.6), We came to your brother Esau, and he is coming to meet you, and there are four hundred men with him.

Don’t blame Jacob for being afraid. He sends gifts on ahead to his brother whom he assumes to be angry. He sends his family on ahead. And then, he remains alone, on the far side of the River Jabbok, just across from the Promised Land. And, he meets God …

This alone is instructive for us. When we come to the end of our ourselves each of us must do business with God, alone. So, if you face surgery, your friends and church family might rally around you, but you go under the gas by yourself. In the same way, we’ll each stand before God alone, and there will be no props or crutches or anybody (but Christ!) to hide behind.

Jacob’s striving brought him to weakness (:24b-25). And a man wrestled with him until the breaking of the day … (:24b). Didn’t see that coming, did we? Even so, there’s word-play to suggest that Jacob’s life had been pointing toward this encounter his whole life. YaKov … YaBok … YeVek. These are the Hebrew words for “Jacob,” “Jabbok” and the action of wrestling. The word root of the three common consonants means “to get dusty”. Everything about this passage points to Jacob’s striving. This man is standing between Jacob and his objective.

When the man saw that he did not prevail against Jacob, he touched his hip socket, and Jacob’s hip was put out of joint as he wrestled with him (:25).

First, who is this man? The “Angel of God” or the “Angel of the LORD” appears throughout the Old Testament. He claims divine authority, exhibits divine attributes, performs divine actions, receives divine homage, and identifies Himself as God. (Check out last week’s passage, Genesis 22.15-16, as an example.) His appearances grow more seldom as we approach the coming of Christ, until we come to a different messenger who identifies himself as Gabriel “who stands in the presence of God”.

We’re looking in this passage at the pre-incarnate Christ! Christ in the form of man, though not yet in the flesh of man. Familiar New Testament passages help us see how appearances of Christ (we dare not yet name Him Jesus!) are much in keeping with Christ’s shepherding of God’s elect throughout all time.

And, while Christ wrestles with Jacob, He “… did not prevail against Jacob”. How so? Certainly, we’re looking here at a foreshadowing of Jesus’ limiting of Himself at the incarnation. We might also be looking at Christ’s unwillingness to override Jacob’s will. Jacob is about to give in, but he needs to be weakened first. And, he is weakened, at the point where Christ simply touches him. I believe this is where Jacob, finally, is saved!

There’s something for us to learn about faith here. Faith is the recognition of our own weakness and the embracing of the strength of another. Those of us who have trusted in Christ have done this. And, I believe, Jacob finally ceases striving and depends on God here.

The first is about the source of blessing (:26). Man: Let me go, for the day has broken. Jacob: I will not let you go unless you bless me. Notice that he’s fought the man, now he’s clinging to Him. It’s like he’s saying, I’ve tried to get the blessing for myself, now I realize you had it all along.

The second exchange is about the condition of blessing (:27). Man: What is your name? Jacob: Jacob. In saying this, Jacob is acknowledging that he is a striver.

The third exchange is about dominion (:28-29a). Man: Your name shall no longer be called Jacob, but Israel, for you have striven with God and with men, and have prevailed. Jacob: Please tell me your name. Notice here that the one naming exercises dominion. (Think of Adam in naming the animals.) Notice, also, that Israel means, “one who strives with God”. Jacob has fought everybody, and but for God’s mercy he’d persist in having his own way with God as well.

The fourth exchange is about mercy (:29b). Man: Why is it that you ask my name? There’s a break in the pattern here. The man’s question reminds us of Moses’ encounter with God at the burning bush. In the end, God asks the questions, and the one asked responds in faith.

Jacob: So Jacob called the name of the place Peniel, saying, “For I have seen God face to face, and yet my life has been delivered.”

Then Jacob limps off to meet Esau having discovered weakness. And (the next chapter shows), he reconciles with his brother, because those who have made peace with God are free to make peace n the horizontal plain of human relationships.

There’s abundant application for Israel here, the first readers of this passage.  In the Wilderness, before entering the Promised Land, they needed to remember that their strength would not be as the strength of other nations. There’s, likewise, application of us. What did Jacob plead for from the man?: Please tell me you name!

We know His name: His name is Jesus. And, at the crack of morning, after the long dark night of the soul, when we’ve finally come to the end of ourselves, the risen LORD will meet us next to the empty tomb (so to speak) where we’ve been raise with Him … And He will bless us.

And, maybe, we’ll walk with a limp. This is because, between Jesus’ two comings, the most joyous, victorious, fruitful, powerful Christians are at the same time the most beautifully broken … and till Jesus comes, they limp.

God’s blessing replaces my striving when I come to Him in weakness and by faith.

Have a blessed week in the LORD. Like Jacob, cease striving with God. Do limp, if you must, but come to Him by weakness and by faith. In Christ, there is salvation, blessing, and certain victory!