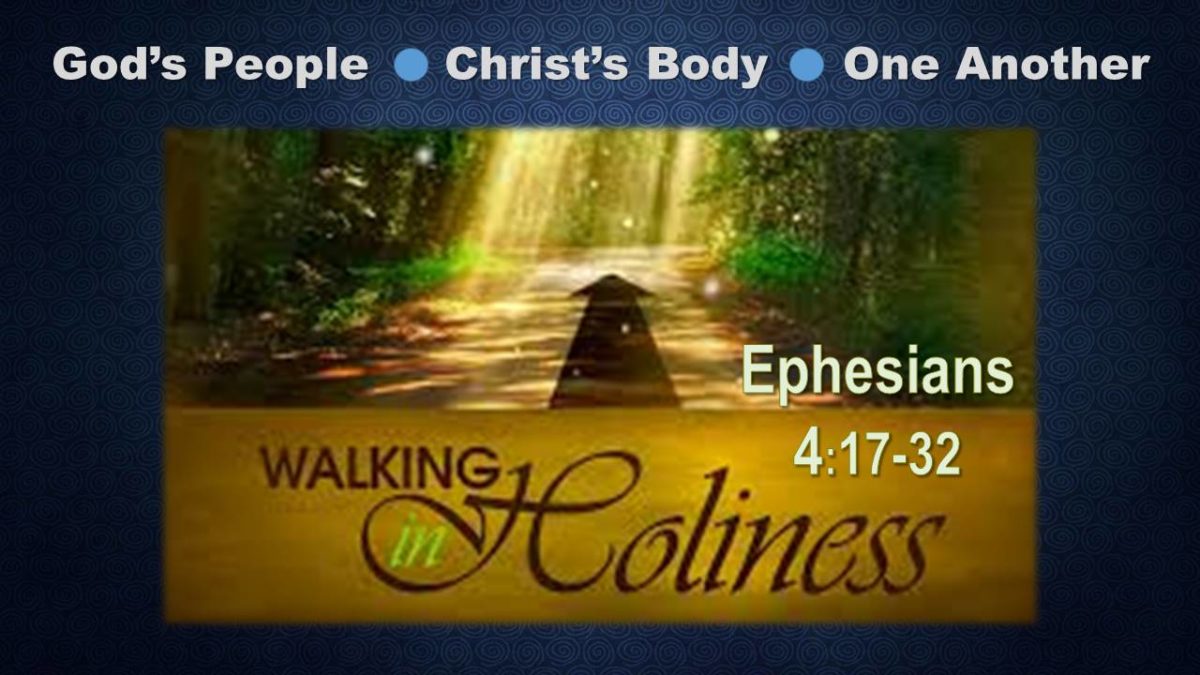 Tuesday evenings, our small group meets. In addition to eating together and praying together as we learn to trust Christ in the business of life, we’re also hearing each other’s stories—stories about how we each trusted Christ.

These stories fascinate! Invariably, they describe the people we were before meeting Jesus, and then the people we became, by God’s grace. There was a clean break!

But, there’s also a lag. Sometimes—and we talk about this freely—the way we are today still looks a bit like the people we once were. This only shows our need to grow in holiness. And, we’re growing together.

In Ephesians 4.17-32, Paul recognizes that the believers at Ephesus have a story. For them—as with us—there was a clean break, but there’s a lag too.

Walk together in holiness, like the people you are in Christ! he tells them.

The passage starts by describing whom the Ephesians used to be. Leave who you were, in your former futility (:17-19), Paul tells the Ephesians. … you must no longer walk as the Gentile do,  in the futility of their minds (:17, ESV).

Those who don’t know Christ are (literally) “empty” in their reasoning; they’re “darkened in their understanding,” indicating their moral bankruptcy; they’re “alienated from the life of God,” showing how they’re relationally cut off from God. They have become callous and have given themselves up to sensuality, greedy to practice every kind of impurity (:19).

There’s a reverse sequin in this description. The demise of the ungodly ends with corrupt reasoning, because it begins with a lifestyle that knows no boundaries. C.S. Lewis has said that “Every legitimate pleasure is a means to a higher end”. So, for example, truly delicious food is also nutritious and serves the purpose of building up the body. These pleasure Paul describes have no end other than that the unregenerate person just “stinking” wants to live that way.

Did you once live that way? We all did. But, God has called some of us out by His grace! And, we responded in faith!

Now, Paul says, live who you are, in your present holiness (:20-32). Verse 20 is my favorite and, arguably, the key verse: But that is not the way you learned Christ!

Typically, we learn about things, learn a lesson, learn the facts. But, here we learn a person, because the truth is in Jesus! Those who leave the people they used to be now have a personal relationship with Jesus by faith. That’s the difference!

Verses 20-24 describe the new position of those who have “learned Christ.” There’s a master illustration, involving clothes. We’re to “put off” (like old clothing) the habits and lifestyle that characterized us before we knew Christ and “put on” (like new clothing) the things of Christ.

Like oily shirts and socks and underwear that has been stuffed into a rag bag in the garage, those aspects of our old lifestyles have been put away forever. This is a decisive action. And, we’re not to make our way out to the garage to get dressed ever again. We’ve been clothed in Christ, once and for all.

Verses 25-32 list out some practices of those who have “learned Christ”. They include (with one exception) a negative command, a positive command, and a principle giving the reason for the command.

Falsehood and truth (:25). … let each one of you speak the truth with his neighbor,  for we are members of one another. We’re to represent ourselves accurately—this includes FaceBook, elsewhere in social media, and in personal, “real space” talk with one another.

Righteous anger and the proper response to it (:26-27). Interesting here is that we’ll get angry. But, hanging onto that anger creates fertile ground for the Evil One. We need to keep short accounts with one another.

Income and work (:28). Likely, this command goes back to the ancient cultural practice of poorer laborers dipping in a bit to the profits of more affluent patrons. That practice is not to be associated with Christ! Don’t ride the time clock. Rather, do honorable work with the intent of sharing your profit.

Speech (:29-30). Build people up. Don’t use words to compete, to promote yourself, to put other people down. This grieves the Holy Spirit.

Disposition and attitudes (:31-32). … bitterness (attitude) … wrath and anger (disposition) … clamor and slander (speech). All of these must be responded to with kindness and graciousness, modeled on Christ an His work.

So, we’ve made a clean break. Now, we get to walk together, like the new people we are in Christ!

And, as we do, consider some questions to help us see the truths of Ephesians 4.17-32 more clearly:

Where do the habits of your heart most reflect whom you used to be?

Where do you need to make a clean break with past places and friends?

Where do the desires of your heart fall short of who you are as one of God’s called people?