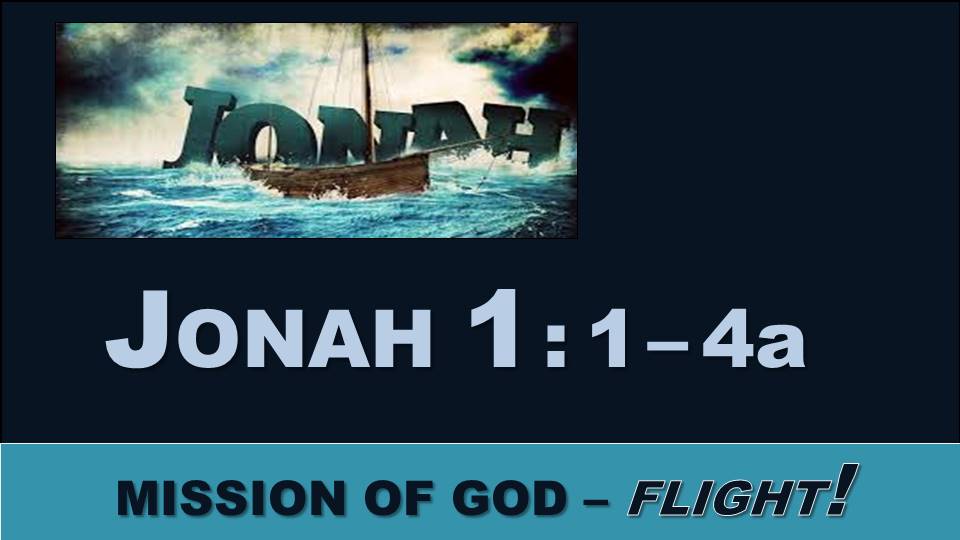 The Book of Jonah is fantastic drama! The historical, prophetic narrative account of Jonah (working in the 8th century before Christ and during the days of Israel’s divided kingdom) involves the vast landscape of God’s mission to the nations. Within the cosmic plan of God, you have Jonah—small, flawed, deeply insecure, kind of a “loser,” a whole bunch like us.

God’s Word broke in on Jonah urgently and with clarity: ” … Arise … go to Nineveh, the great city and call against it.” Nineveh, not yet the capitol of Assyria, was yet the major city in the rising, global power to the east of Israel. Sending a prophet there was unprecedented. God typically sent prophets to confront Israel over her failures. If He dealt with other nations, it was for the refinement of Israel. God is up to something big here!

God’s Word broke in on Jonah with purpose: ” … for their evil has come up before me.” Jonah, accustomed to confronting evil (as he’d done under Israel’s King Jeroboam II, 2 Kings 14.25), will be tested in a new way by this assignment. He’s hardly ready. Often, we aren’t either. So, in response to God’s Word …

Jonah resists God’s Mission and flees (:3). The irony here is laugh-out-loud material. The dynamic reading goes something like this: ” … Arise … go to Nineveh. So, Jonah arose … and fled away from the presence of the LORD.” Jonah’s reason is unknown here (It will be revealed in 4.2), but his response is, in every way, perfectly wrong. There’s also absurdity in fleeing the presence of God. “The earth is the LORD’s and the fulness thereof” (Ps 24.1). You can’t get away from God, but you can run from the sense of His presence.

Jonah flees downward. There’s rhetorical and artistic power in this description. “And, he went down to Joppa …” Then, Jonah went DOWN into the ship. Later, he will go DOWN into the sea. And the fish will take Jonah DOWN to the bottom of the sea. In his flight from God Jonah is going down … down … down, into chaos and death. Only when he encounters God in the most unlikely of places will he be reborn to life.

Jonah flees to an exotic destination on the rim of the known world. We catch a hint of what people thought of Tarshish from 2 Chronicles 9.21, describing shipping in the Golden Age of Solomon: “Once every three years the ships of Tarshish used to come bringing gold, silver, ivory, apes and peacocks.” Sounds like a good missionary destination, doesn’t it? Except God hadn’t sent him there. Jonah is going west, not east.

God rebukes Jonah for resisting His mission (:4a). We have to believe that if Jonah had stuck around God would have talked to him, reasoned with him, given him a sign. This was God’s way with Moses earlier. But, Jonah had to do things the hard way. He couldn’t escape God, and God responded.

The stormy sea is often a picture in the Hebrew Old Testament of chaos and destruction, apart from the formative order of God’s work. (Think of the first verses of Genesis, how God organized creation from that which was “formless” and “void”.) Here, Jonah is headed for destruction. There’s also the theme of the “giantesque,” the really large: “But the LORD hurled a great wind upon the sea …” Later, there will be a great tempest, a great fish, a great city, a great selfish anger, and a great selfish delight. Everything in God’s mission is too big for Jonah!

And, as we draw back to think about the effect of these first verses on our own lives, we realize that everything about God’s mission is too big for us, too.

Jonah is a great book for those who trusted Christ long ago. Jonah had a fine resume of having served God, but he’d gone into retirement, apparently. What God calls Jonah to is present, not past, faithfulness. Unlike Jonah, we don’t have to wait for a particular word to come from the Lord. We have God’s revelation of Himself in the Gospel, in our Old and New Testaments. This puts us in a great place to ask ourselves: Am I following God through His Word now?!

Jonah had his reasons for not following God (to be revealed deeper in the book). And, we have our reasons why we might not be following God: We’re busy (doing good things) … we’re hurt … we’ve chosen sides against somebody who doesn’t care much for God … we don’t think God can find us.

Whatever our reasons, the beginning of a study on the excellent little book of Jonah is a great time to check our present attitude toward God and His call on our lives, especially as we consider God’s mission of mercy on the undeserving.

Sometimes, my response to God’s merciful plan includes resistance. Am I resisting God? …

Find someone with whom you discuss Scripture. Talk about some of the following questions, and then read through the rest of the Book of Jonah to prepare for next week.

In your own words, describe why the little Book of Jonah has such power as a story. What about this prophetic narrative grips you?

What do you suspect God is up to, at this juncture in Jonah? What do you think God is doing in the nations, and in Jonah’s life?

What are some ways that you are putting yourself in the place to hear from God in His Word?

Are there places in your life where you don’t want to hear from God? When were some times when this was true in the past?

Are there places in your broken experience with God and other people where you don’t think God can go? Do you have a redemptive story about a time where God broke through one of these places? How about sharing this story?