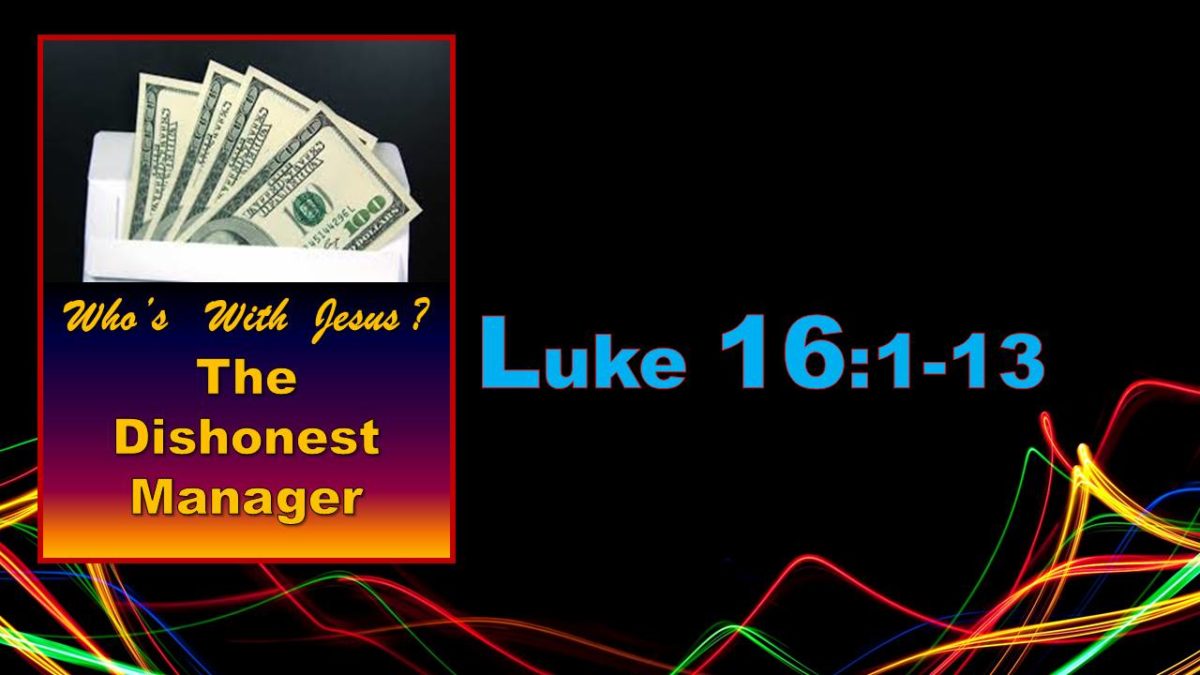 This week we come to one of Jesus’ most difficult parables, The Dishonest Manager, Luke 16.1-13. Since the world of the story strikes us as both arcane and culturally distant, here’s a modern parody on the parable. I call it “Mr. Thump and the CBO”.

There was once a man named Mr. Thump. Now, with a name like Thump you can’t run for public office. But, you can be a businessman …

Mr. Thump was a big businessman. He ran an international imports-exports business that imported and exported every conceivable product anywhere on the globe.

But, Mr. Thump wasn’t only a businessman. He was philanthropist. With every profit he gave over-and-abundantly toward a myriad charitable causes that people really cared about: needy children, to be sure, but also endangered snails, rainforests, baby cheetahs, little bugs that people cared about … Mr. Thump knew that both his business and his charitable causes depended on his reputation.

Now, Mr. Thump had a CBO. CBO stands for Chief Brand Officer. The CBO was responsible for the public image of the business and Mr. Thump.

This CBO was dishonest, but also very shrewd. Over time, he figured out a way to build hidden fees into the import-export business, which he then harvested for his own purposes.

Mr. Thump wasn’t fooled. He called his CBO into the board room and said, “Today is the day of reckoning! I’ve hired an independent auditor to examine your work, and you have until the auditor finishes his work to set your accounts in order.

The CBO knew his professional reputation would be ruined. But, he had a plan. He instructed his accountant to pull up the names of every donor to Mr. Thump’s charity and make an additional donation to that donor’s favorite cause—all in the name of Mr. Thump.

The next day every headline on social media touted the generosity of Mr. Thump. Stock in the company went through the roof as global investors poured in. Mr. Thump’s business and reputation was bigger than ever …

Later that day Mr. Thump sent out a tweet on his personal Twitter account. “My CBO is a scoundrel,” Mr. Thump said. “But, he’s my kind of scoundrel. He recognizes a crisis when he sees one, and he does something about it. But, more than that, he understands that I am generous, and he enhances my reputation.

The Parable of the Dishonest Manager (:1-8a). Back in Luke 16, the subtlety of the teaching comes from Jesus’ presentation of the central character who is both commendable and unsavory. On the surface, it appears Jesus is talking about money and possessions. But, to think only about Jesus’ own application of His teaching to money and possessions is to miss His more central point—about the character of God, my condition, and the crisis brought about by the gospel.

This structure is called a chiasm, because it forms half of an “x” that looks like the Greek letter “chi”. Such structures are frequent in Semitic literature, and they tip us off to what the speaker or writer want to tell us. The meaning of a writing laid out as a chaism is often found right in the center—in this case, verse 4, about the proper use of resources in light of eternity.

Pointing to this main idea, you have the character of the Master, the rich man. He’s both just and merciful. And, while he stands in for God in the parable, he doesn’t represent God in every respect. Still, he does require a reckoning for injustice (like God will). And, his mercy (squeezed out by trickery in the parable) is true to who God is.

Likewise, the manager is commended, because he knows a crisis when he sees one and doesn’t just sit there but responds to the crisis. And, he does so using possessions at his disposal in the present to prepare for the future.

The Point of the Dishonest Manager (:8b). The main idea, hinted at in verse 4,  is stated clearly in verse 8b: The sons of this world are more shrewd in dealing with their own generation than the sons of light.

What Jesus is saying is that even godless scoundrels know a crisis when they see one. Even people who are only interested in advancing their own interests know the time to act.

The crisis Jesus is speaking of is the crisis of His own coming and the arrival of the Kingdom of God. I am bringing both God’s justice and mercy, Jesus is saying. Turn from your old ways of doing things. Respond to me and be changed! Jesus implores …

Those who “get” Jesus are those who recognize the crisis and fall on the mercy of God in Jesus.

That’s the point of this interesting and subtle parable—just as true for us at the brink of Jesus’ second coming as it was for those at the verge of His first.

Practical applications by Jesus from The Dishonest Manager (:9-13). Now, we who live after Jesus’ work on the cross respond to Jesus by responding in faith to the gospel—the good news of Jesus’ death, burial and resurrection. Responding to the gospel reorients every part of our lives. And those who respond to Jesus also, like the screwd manager in the parable, use their earthly possessions to prepare for a future with Jesus.

So, while the parable is really about our response to Jesus, it has implications for our use of money and possessions. This is Jesus’ point in verses 9-13. “Unrighteous wealth” is “unrighteous,” not because money in itself is evil, but because it will fail.

So, what are we to do with money? Jesus says, in so many words …

There IS a crisis. And, we CAN fall on the mercy of God who has provided us with Christ. And if we really “get” Jesus we won’t just pray a prayer and remain unchanged. We’ll live for Him. And all of our resources will be handled in the light of eternity.

Here’s a few questions to consider with others: