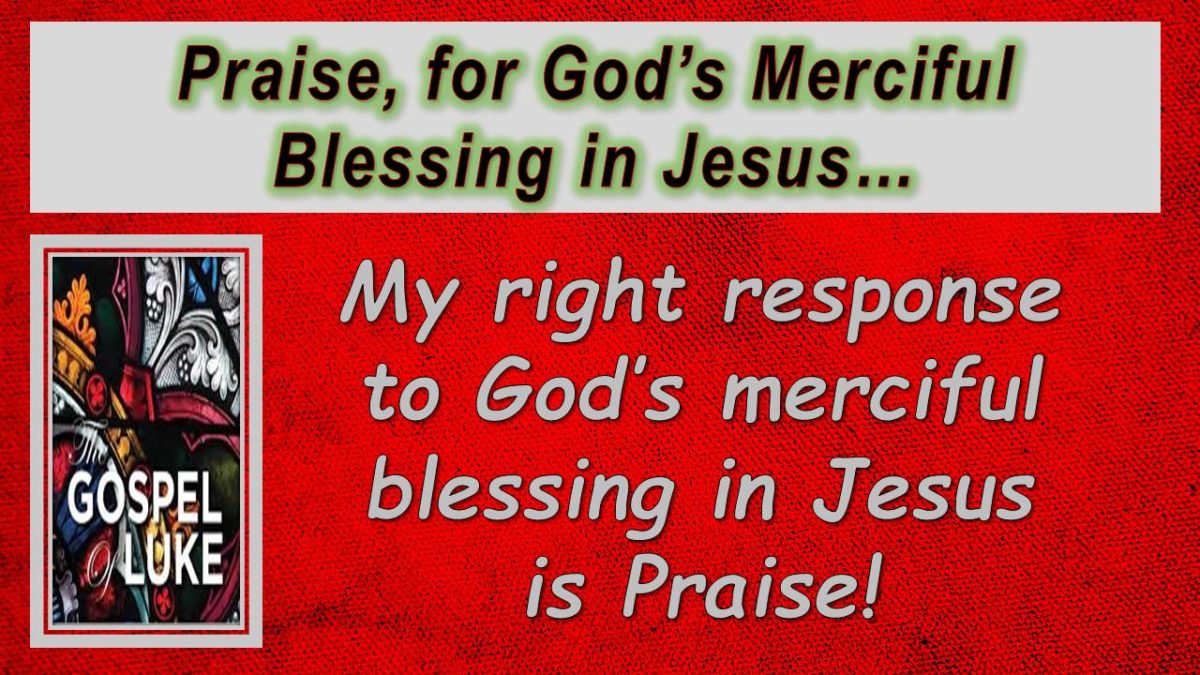 Most people don’t think about it when they pull their phone cameras from their pockets to snap a picture, but every lens has an “infinity setting”. In the old days, like when I used my Nikon F2 “film” camera, there was a little figure-8 setting that let you crank the lens to one extreme to bring into focus everything past a certain distance, as far as the eye could see.

That’s the “infinity setting,” and it’s a picture that helps us understand our passage this week.

In Luke 1.26-38 Mary gives praise to God for His merciful Blessing in Jesus. She considers what God has done, and what God will do. The setting of the passage has Mary visiting her older cousin Elizabeth. A journey of 80 to 100 miles brings Mary to the house. When she enters, and Elizabeth sees her, Elizabeth’s not-yet-born baby, John, leaps for joy. Elizabeth blesses Mary: And blessed is she who believed that there would be a fulfillment of what was spoken to her from the Lord (:45).

Pertinent question for us: Has God really done this? I mean, this week there was another school shooting in Virginia. (Didn’t notice, did you? They’re so common now.) There’s constant squabbling and accusations and scandal in our highest leadership circles as a nation. I read this week about another mega-church meltdown—accusations of pastoral power-abuse and misappropriation of funds.

In what sense has God “made all the sad things come untrue?” as Tolkien’s Samwise Gamgee says at the close of the Lord of the Rings.

One of Luke’s purposes throughout the rest of his gospel is to show how God’s work of redemption in Jesus comes in two stages. There’s Jesus’ first coming—the incarnation, for which Mary gives God praise, and in which (as Mary will learn) Jesus will die but then be raised from the dead. Then, there’s Jesus’ second coming. That’s when He’ll reign. That’s when He’ll “make all the sad things come untrue”.

Mary is seeing God’s prophetic plan through the “infinity setting” of redemption, as the Spirit enables her. She speaks of ultimate redemption as though these acts of God’s deliverance had already take place because, at the coming of Christ in the flesh, they are as good as done.

How about us? In this Christmas season when incomplete pictures of Christ and His work abound in our culture, leading, sometimes, to cynicism and despair, do we give praise to God through His “infinity setting”? You bet, things aren’t what they’re supposed to be. But, as those who live between Jesus’ two comings, we live in hope. Amidst the fallenness of our world (and our own fallenness), we can praise God, having believed that there will be fulfillment of all that God has spoken and promised.

My right response to God’s merciful blessing in Jesus is praise!

Have you ever been depressed, cynical, or even downright antagonistic about Jesus during the Christmas season?  What do you think that said (or says) about your view of the totality of Jesus’ work in His two comings?

How does realizing that things aren’t yet the way they will be help you depend on Jesus and long for His return? How does this realism make the Christian story more believable for you?

Mary starts her hymn: “My soul magnifies the Lord, and my spirit rejoices (literally, “has begun to rejoice”) in God my Savior.” How does looking at everything Jesus will accomplish in His two comings change the way you relate to God in your troubles?