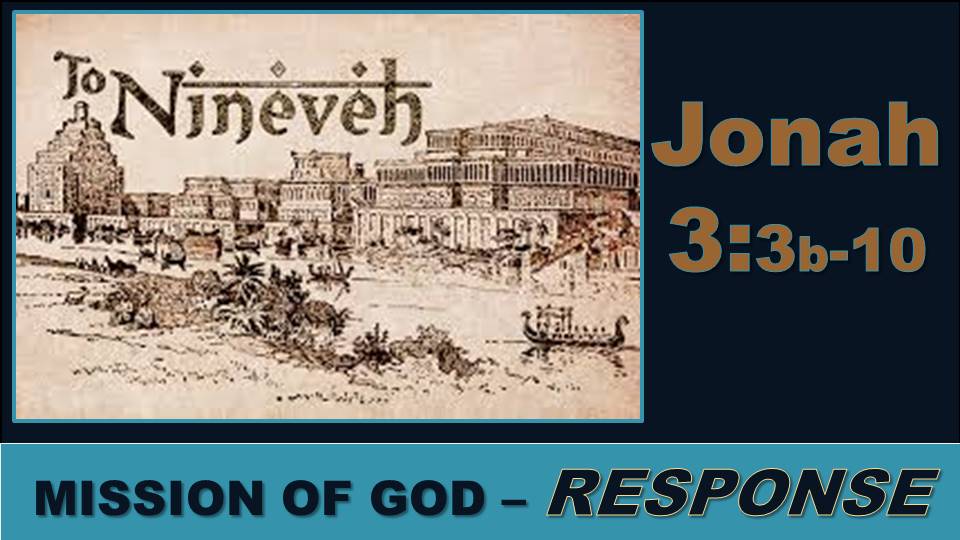 Greetings, friends! We’re moving through a favorite time of year for me. It’s that annual pathway between our Thanksgiving season and the beginning of Advent—our time of anticipation. Super that we can travel take this road together!

As we do, we’re pressing toward the end of Jonah. This week’s passage is about bad preaching, the power of God’s message—despite the poor messenger—and the scope of God’s merciful plan that includes both bad messengers and the worst of sinners. Within the mirror-image structure of Jonah Episode 5 (3.3b-10) is the parallel counterpart to Episode 2 (1.4-17). In both passages, Jonah is with Gentiles who appease God’s wrath—the Mariners by casting Jonah into the sea, the Ninevites through their changed hearts.

Having responded, at last, to God’s commission to preach in Nineveh, Jonah turns up in Nineveh. The response to God’s merciful plan (despite Jonah’s half-hearted effort) is repentance on the part of some of Israel’s most violent enemies.

Nineveh responds to God’s message (:3b-6). From the outset it’s made clear that God rules Nineveh. The Masoretic Text (the standard from which our English translations come) makes this clear with the little phrase “to God”: Now, Nineveh was a great city to God.” (This phrase is, unfortunately, left out for stylistic reasons in most of our translations.) This “great” city belonging to God is such that it requires (literal reading) a walk of three days to visit the place. Paralleling Jonah’s three days in the fish, we see that Jonah’s deathly experience now results in the glorious opportunity to preach God’s message for three days!

But, what does Jonah make of this? Jonah began to go into the city, going a day’s journey (:4). Jonah only goes into the city one day. This is a one-and-done!  A half-hearted effort!

Then, there’s the message. Possibly, it’s the message God gave to him (see 3.2), but does Jonah get it? Yet forty days, and Nineveh shall be overthrown! (:5). The verb in question can be translated actively “to overthrow,” as in “to destroy”. Or, it can be translated passively (and, it is passive in the original) as “to turn”. But, turn to what? Jonah seems to believe that he’s been given a message of pure and certain judgement. God, it seems, intends to communicate the real possibility of judgment, but also the certain extension of mercy to those who will turn to Him.

And, look what happens. Despite the imperfect messenger, Nineveh responds! And, as His message is delivered, God dismantles human power structures (:5) Repentance begins with the common people who fast and cover themselves with sacks: … from the greatest of them to the least of them. God is doing something amazing—not because of the messenger, but in spite of him and because of the message itself.

Then, the King of Nineveh hears the message from others, not Jonah. Jonah never got to the palace, it seems. The king removes his vestments and sits in ashes, just like Jonah won’t. In all of this, we’re getting a clearer picture for why Jonah has responded so poorly all along: Jonah misunderstands the extent of God’s rule and thus the scope of God’s compassionate mercy.

Nineveh repents of its evil ways (:7-9). Making official Nineveh’s response, the King issues a proclamation: Let everyone turn from his evil way and from the violence that is in his hands (:8b). Like the Mariners of Episode 2, the King calls on the One-True-God of Israel, but goes further in calling for ethical transformation. All this takes us back to the reason for God’s threatened judgment in the first place: … for their evil has come up before me (:2b).

The King goes further: Who knows? God may turn and relent and turn from his fierce anger, so that we may not perish (:9) The King understands God better than Jonah. He recognizes God’s sovereignty in punishing sin, but also God’s freedom in issuing mercy.

God relents from His plan to judge Nineveh (:10). God relents from judgement. Important here is what satisfies God’s wrath. In Episode 2, it was Jonah being judged, cast into the sea. In this passage, it’s Nineveh’s citizens turning from evil. God most desires the sacrifice of a changed heart. Is Jonah’s heart changed?

God will judge sin, but God’s merciful plan for the nations includes mercy an compassion for those who will take refuge in Him. Is Jonah taking refuge in God?

And, just like that, this ends God’s dealings with Nineveh in the book, but not His dealings with Jonah. God is just as interested in the transformation of the messenger as He is the response of those to whom the message is given.

The major lesson of Jonah 3.3b-10 can be stated this way: My response to God’s merciful plan must allow me to acknowledge that no one lies outside the reach of the Gospel.

In his time, Jonah didn’t get this. We’ll see next week that God’s mercy on Israel’s worst enemies landed outside of Jonah’s redeemed imagination.

As we prepare to finish up Jonah next week, let’s think together about some questions coming from Episode 5 (3.3b-10):

Why do you think Jonah did such a poor job of preaching? In your own words, how would you describe Jonah’s grudge against God?

Again, in your words, why do you believe Jonah misunderstood the purpose of God’s mission for him and for Nineveh?

In our cultural setting where are we most inclined to misunderstand God’s compassionate mission for those around us?