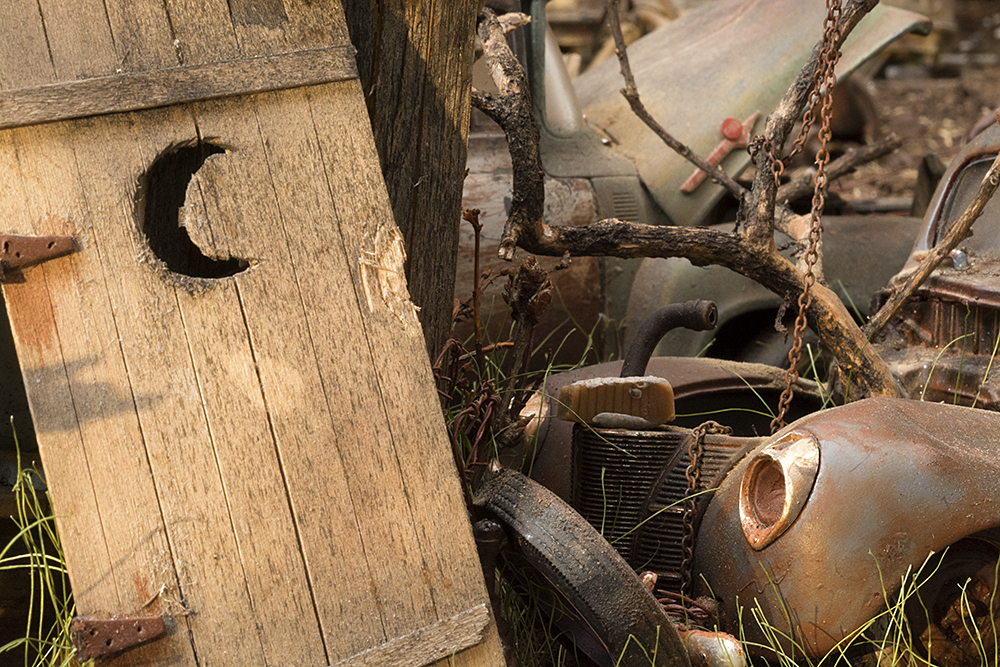 What’s the most frustrating job you’ve ever had?

Recalling that job is easy, right? The one where you had to ride the clock, the one were you got micro-managed, the one with all the broken machinery you got stuck with. Frustrating, wasn’t it?

We’re spending these early fall weeks at Woodland thinking about work. We started last week, in Genesis 1-2, thinking about the goodness of work: work matters, because God works. God Himself is a worker. He made an image-bearer to share His own work; He instructs mankind to flourish; He provides the means through creation for humankind to live through work; His material creation is good; and, He takes satisfaction in His work.

All of this means that the work we do matters! Yes, in addition to the opportunities I have to build relationships and share the Gospel with co-workers, my work matters in and of itself. Much of this is because my work is the way God cares for other people through me. “God Himself milks the cows through him whose vocation it is,” as Martin Luther said.

But figuring out just how God is working through us is pretty hard in a technological world where product is often so far removed from worker, where people often get treated like machines, where work is done badly.

Genesis 2-3 helps us understand how we got here. And the LORD God commanded the man, saying, “You may surely eat of every tree of the garden, but of the tree of the knowledge of good and evil you shall surely not eat,  for in the day that you eat of it you shall surely die” (2:16, ESV).

We know the story. Our first parents chose, in the critical moment, to ignore God’s Cultural Mandate of 1:28. Their failure to flourish according to God’s design was—among other failures—the failure to work well. And so, today: work frustrates, because people sin.

In the oracle of Genesis 3, following creation’s fall, God Himself addresses His creation through the Satanically possessed snake, and He addresses us (really) through our first parents (3.14-19). Important to digest is the truth that God now describes the world as it is in rebellion against Him. These are descriptions, not prescriptions. It’s not supposed to be this way! But it will be, for a time, and here are the results of man’s shoddy workmanship:

Creation is fallen (:3.15). The snake is a fascinating creature in the biblical account. Since the serpent represents creation, and the sub-human animal order in particular, his presence allows God to speak to His creation. Since the serpent is possessed by the Evil One, God may address the power behind the animal, but in a way intelligible to us. The mere fact that the Creator speaks directly to the slithering creature at all, while bypassing His vice-regent image-bearer, indicates disturbance in the created order. In God’s edict itself we learn that humanity—which was to show creation what God is like—will now struggle for survival and be challenged by creation. He shall bruise your head, but you shall bruise his heel.

Here we have the root of every problem in work. Work, which was to result in human flourishing, will now be the means to bare survival. In scrapping with the serpent in the dust, it won’t be clear who has dominion. And, in a more technological age, people will increasingly be treated like machines, rather than image-bearers. This will be the source of all the “dumb” jobs we’ll ever do. Even okay jobs (like being a lifeguard or a security guard) will be tainted with the curse, because they owe their very existence to human inability, deception and failure.

Human working relationships are fallen (:3.16). God then addresses us as women and men through our first parents. To Eve He explains that the work of producing offspring will now be frustrated. I will greatly multiply your painful toil in conception, and in painful toil you will bring forth sons (my translation).

This isn’t talking so much about delivering babies as it is the entire business of bringing up offspring. God is saying, You’ll want children, but then you won’t be able to have them (maybe); but then you’ll have them, but then they’ll break your heart … And, we have to look no further than Cain and Abel to see how that worked out for Eve.

More, and speaking to all women, your relationships with men will be frustrated. Your desire shall be for your husband, and he shall rule over you. You’ll crave male affection and attention, but then men will bully you! You’ll do the hard work of homemaking, but be under-appreciated. Sexual intimacy too will become a source of contention. Some of you will stand up for yourselves and get liberated, but you won’t be affirming men; you’ll be trying to live without them. Men will get confused about masculinity, so that (some) professional football players will beat up their girlfriends, but you’ll cheer for them anyway (if they wear the right uniforms). Then, the whole idea of gender will get confused, so that people will be encouraged to spend their lives reconsidering the gender that they now believe society assigned to them at birth … So much for human fruitfulness!

Cultivation of the earth is fallenness (3.17-19). In addressing men (through Adam), God comes to what we typically consider “work”. Thorns and thistles [shall be caused to grow], and you shall eat the plants of the field. In other words, you will eat, but it will be frustrating. By the [sweat of your nose] you shall eat bread, till you return to the ground, for out of it you were taken. More good news—death will be your only escape from this affair. Barely hopeful. And, so much for being “like God”.

We have here the source of all frustration in work, pictured by the struggle with the ground. Creation will fight you, God says. Yes, you might try to cheat this process, and it might look for a time like you’re winning (and some people will get rich!), but there’s always a cost. You’ll use pesticides, we imagine God explaining, so you’ll produce more from the earth. But then the bees will start to disappear, along with their pollinating work. And then, everybody will become so gluten intolerant that you can’t eat the stuff of the field anyway. You’ll clone sheep, but then instead of improving breeds you’ll now be stuck with the weaknesses of whatever breed you’ve cloned. You’ll clear cut the Northwoods of Wisconsin, so that when all the trees are gone, Westboro and Rib Lake will practically die—and the railroad will leave, and the high school in Westboro will close, and (in 2017) you’ll barely be able to support your little library …

And, here’s the Good News! There’s a little trickle of water in the desert of Genesis 3. In verses 22-24, our first parents are cast from the Garden, and an angel guards the way back,  … lest he reach out his hand and … live forever. God is not content to let us live in fallenness.

The other bit of good news appears so slender that it might be easily missed in verse 15, from God’s address to the snake: … he shall bruise (or, crush) your head, and you will bruise his heel. There’s a champion worker coming! Yes, this champion will be hurt too in the struggle with fallen creation, but fallenness will not prevail. In fact, this champion will work the cruse backwards!

So, even as we lean into that outline of hope we glean from Genesis 3, we draw some takeaways for our workweeks ahead:

Here are some thoughts question that would be good to consider as we work this week:

How much of your frustration with your work is the result of sin?

How much of your frustration with your work will Jesus finally redeem when He comes?

How does God’s grace in your life help you serve God through your work while you press toward the return of Christ?

How badly do we need hope in the champion worker who has come? (That’s Jesus, by the way …!)

How badly do your fellow image-bearers need you to persevere, because you understand the big picture about what God is doing?

How much does the hope with which we do our jobs demonstrate that we understand the Gospel?