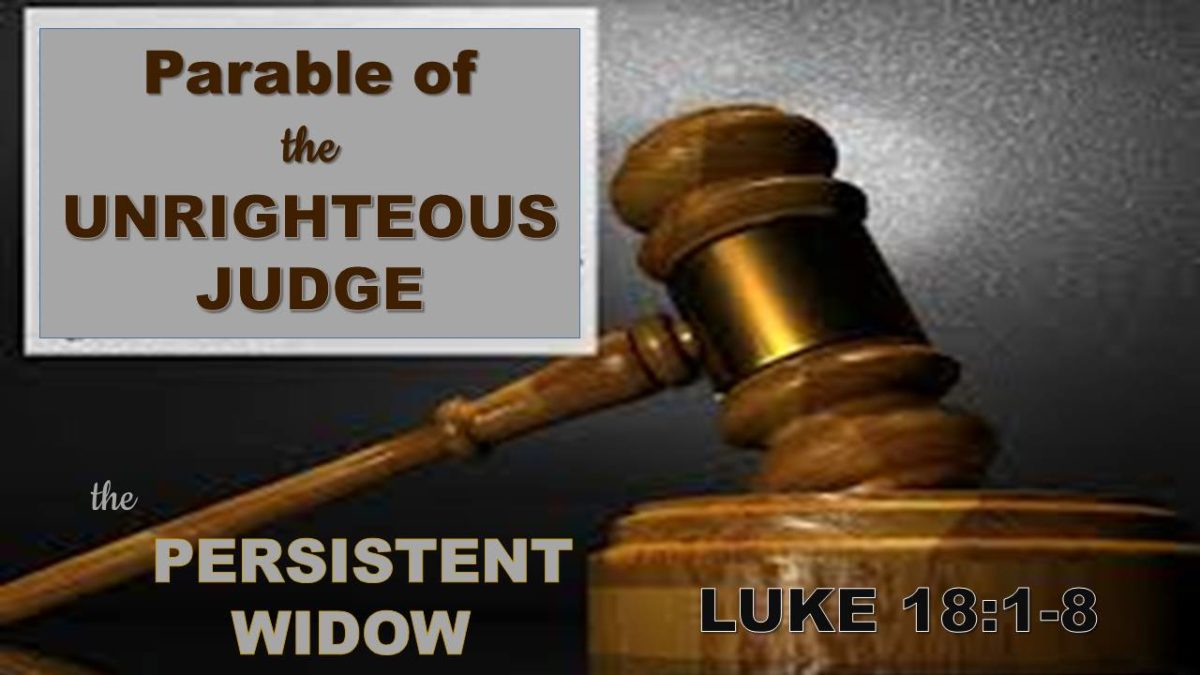 Have you ever felt powerless?

Maybe, you put a charge on a credit card that you later couldn’t repay. Or, you told a friend something you wished you hadn’t. Or, you were with a hurting person, and you just didn’t know what to do.

Terrible feeling, isn’t it? Made you weary, didn’t it?

The Parable of the Persistent Widow in Luke 18 is a story for those who are weary in their powerlessness. Jesus tells this parable as part of a larger conversation with the Pharisees that begins in 17.20. Then, He pulls back (apparently) to explain His teaching to His disciples.

The wider conversation involves the coming of the Kingdom of God and when it will come. Naturally, the Pharisees (and, probably, everybody else) thought that Messiah would ride in, kick out the Romans and be ruler of the whole earth. They weren’t far from wrong. But, they didn’t factor in the cross!

Jesus responds by teaching that the Kingdom is present with the King, who is “in their midst” (7.21). And, Jesus teaches that the fulness of the Kingdom will only come after Messiah has suffered (7.24-25), after which time evil will be destroyed (7.27-30).

The Pharisees’ problem (and ours, sometimes) is that they didn’t recognize Jesus’ two comings. Till Messiah returns God’s people will suffer and wait expectantly for His coming … “the days are coming when you will desire to see one of the days of the Son of Man, and you will not see it” (7.22).

In the parable itself, we have an unrighteous judge who neither fears God nor “respects” man (ESV). The word can mean “be ashamed”. In the shame-based eastern culture of the parable, the judge makes no effort to help others save face. He almost certainly takes bribes, and he doesn’t care.

The Widow is the other character. In the man-dominated world of the Middle Eastern court system, the fact that she must represent herself indicates that she has no man in her life. She is certainly too poor to pay a bribe. Perhaps, there’s a dispute over her late husband’s estate. A state of injustice exists.

She does have one advantage: she can abuse the judge! Because nobody takes her seriously, she can stand on the perimeter of the court and hurl insults at the judge. A man would be kicked out. Nobody cares about the widow.

The judge finally gives in, because he fears the widow will “beat me down”. The term is one taken from boxing. It means, literally, “to beat black and blue”. “Oi weh!” we imagine the judge exclaiming. “Enough already! Bring her here. What does she want?”

In Jesus’ commentary from verses 6-8, two lessons and a question come from this parable. In the character of the judge we learn that unlike the unrighteous judge, God will bring justice to His people. The logic is taken from a Rabbinic rhetorical teaching method, the Hebrew name for which we would translate as “from the light to heavy”. It’s a “if this … then how much more?” kind of argument. So, if even an unrighteous judge—who doesn’t care about God or people—will reward perseverance with justice, how much more will the one, true God give justice to His people He has chosen?

The second lesson comes from the Widow. Through her character we learn that the LORD will be patient with believer’s persistence in prayer while they endure injustice until Jesus comes again in power to vindicate them.

But, will God’s people persist in prayer till Jesus comes back? “Will he find faith on earth” (verse 8b). That’s the question.

Like the Pharisees, we sometimes mistake this time between Jesus’ two comings for the fulness of the kingdom. We experience powerlessness, and we say “Why does God not change my situation now?!”

In so complaining, we forget that Jesus hasn’t come back yet. And, why? Second Peter 3.8-9 helps.

But, do not overlook this one fact, beloved, that with the Lord one day is as a thousand years, and a thousand years as one day. The Lord is not slow to fulfill his promise as some count slowness, but is patient toward you, not wishing that any should perish, but that all should reach repentance (ESV).

God is yet gathering “the elect” to Himself. But, until Jesus comes again, we persist in prayer. What keeps us from growing weary is knowing that God is not like the unrighteous judge. In fact, since the time of the telling of this parable, Jesus has taken up residence with the Father, again. Romans 8 describes how He intercedes for us:

Who shall bring any charge against God’s elect? It is God who justifies. Who is to condemn? Christ Jesus is the one who died—more than than, who was raised—who is at the right hand of God, who indeed is interceding for us.

That’s really Good News! Not only are we, unlike the Widow, not unrepresented in court. But, Jesus Himself represents us before God! Knowing this keeps us from losing heart.

Those who “get” Jesus persist in prayer knowing God hears (now) and will deliver them finally and completely, very soon.

Find somebody to discuss this parable with. Talk through these questions:

What is the hardest part for you to take in about this parable?

Where do you struggle in your times of prayer with God?

What about the work of Jesus is most important for you in not growing weary?

What methods for prayer have you found helpful? Prayer journals? A certain kind of list-making or note-taking? What would you recommend to others to help them organize their times of prayer with the Lord and help them be persistent?